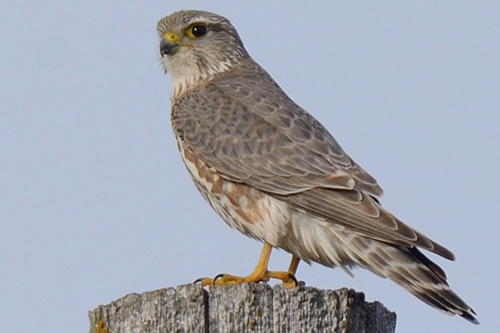 Characteristics and Range With its noisy territorial calls and fearless forays against larger intruders, the Merlin is a conspicuous breeder over much of the province. Often misidentified as a Peregrine Falcon by non-birders, it is considerably smaller than that species, and much more common throughout its range, which occupies much of the Northern Hemisphere. Breeders in central and northern Manitoba (the boreal or taiga Merlin, F. c. columbarius) are dark grey above and buffy underneath, while those in the southern third of the province are the much paler Richardson's subspecies or prairie Merlin (F. c. richardsonii). Most of Manitoba's breeders winter south of the border, with the non-breeding range stretching throughout the conterminous U.S.A., Mexico, Central America, and sparingly to the northern tier of South America (Warkentin et al. 2005). A few Richardson's Merlins winter in Winnipeg and other urban areas in the south of the province; the first indication of overwintering in Winnipeg was noted on the 1976 CBC, with numbers remaining low until the late 1980s and peak numbers (10–17) occurring between 1997 and 2003.

Distribution, Abundance, and Habitat The Merlin is found throughout the province, with the exception of the Arctic Plains & Mountains. This latter region is beyond the treeline and lacks the spruce trees typically used by the Merlin for nesting (although ground nesting may occur). The species is nowhere common, but can often be found in suburbs, parks, cemeteries, and farm shelterbelts or woodlots in the south, generally where there are mature spruce trees. Here, the Merlin will use old American Crow or Black-billed Magpie nests, usually high up in the tree and close to the trunk. In central and northern Manitoba similar nesting sites are used, often in isolated, small stands of trees or in narrow strips of forest on top of eskers. Small towns and cottage areas in the boreal forest are also favoured, perhaps because both crows (potential nests) and bird feeders (prey concentrations) are often present, along with openings suitable for hunting. Dense forests of any kind are avoided, perhaps explaining the Merlin's scattered occurrence through the Boreal Softwood Shield.

Trends, Conservation, and Recommendations After recovering from population lows caused by persistent pesticides (Warkentin et al. 2005), all indications are that the species is either continuing to increase in Manitoba (BBS data) or at least levelling off after gains in the 1980s to 2000s (P. Taylor, pers. obs.). Population increases of Richardson's Merlin in southern Manitoba over the last few decades are most likely due to the maturation of ornamental spruce trees in towns and farmyards, increased access to prey (especially around bird feeders), and increased availability of the old nests of corvid species. Parallel increases have been noted in boreal populations, especially between 1980 and 2000. Its recent adaptation to urban, suburban, and rural habitats is similar to changes observed for Cooper's Hawk. Adequate nesting habitat is available and should be present into the foreseeable future. Nonetheless, it is likely that tallies of wintering birds will remain below the peak levels of 1997 to 2003, as urban populations of its main winter prey (European Starling, Bohemian Waxwing, and House Sparrow) have declined significantly in recent decades (CBC data).