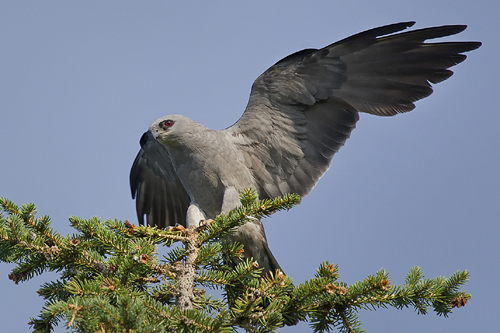 Characteristics and Range The observation of Mississippi Kites and the subsequent discovery of their nest in Winnipeg in the summer of 2014 provided one of the most outstanding records for the atlas—Canada's first and only nesting record and the northernmost recorded nesting. This graceful raptor is about the size of a Cooper's Hawk and has long, narrow wings. The plumage is largely grey, palest on the head, while the primaries and tail are black. Males also show white secondaries. The species breeds mainly in the central and southern Great Plains and the southeastern U.S.A., with disjunct populations as far west as Arizona and north to Nebraska, Iowa, and Virginia. It has been expanding its range in recent decades (Parker 1999). Wintering takes place in central South America.

Distribution, Abundance, and Habitat Distribution, Abundance and Habitat The Winnipeg birds, first noted by Michael Loyd around 18 July, 2014, frequented an area in River Heights, where a nest was located on 31 July. It contained one chick, which later fell from the nest and had to be taken for rehabilitation (Artuso and Koes 2015). One or two birds were seen intermittently in 2015, but there was no evidence of nesting (Koes and Taylor 2016). In the southeastern U.S.A., most birds breed in old-growth forest, but since the mid-1970s Mississippi Kites have nested abundantly in shelterbelts and residential urban areas in the Central Great Plains, often colonially (Parker 1999). In Winnipeg, the nest was located about 20 m high in a bur oak in a well-wooded neighbourhood. This species can undertake long-distance pioneer movements such as occurred in Newmarket, New Hampshire, when the first Mississippi Kites ever recorded in that state nested in 2008 and returned annually thereafter (Swick 2014). The Winnipeg nesting should be viewed in this context.

Trends, Conservation, and Recommendations This species has increased in the western U.S.A. due to post-settlement habitat changes (Parker 1999); the overall population trend also appears to be increasing. As such it is not considered a species of conservation concern. With climate change, future range expansion to the north is possible.