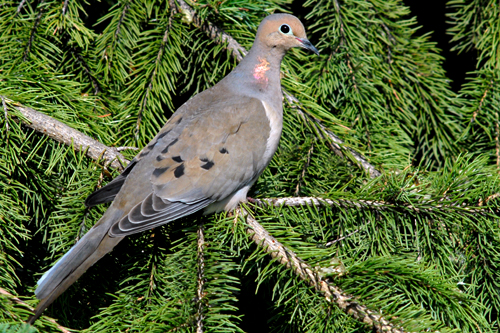 Characteristics and Range The Mourning Dove is a medium-sized brown dove, distinguished from all other Canadian doves and pigeons by its long, tapered tail and a small black spot below the ear. It earns its name from its owl-like, melancholic call. It is the most widespread dove in North America and nests from the Gaspé region west to central British Columbia and south to Middle America. The northernmost populations are migratory, with wintering from southern Canada (rare but regular overwintering attempts in southern Manitoba) south to Panama (Ortis et al. 2008). Banded Manitoba nesters have been found across the southern U.S.A. from California to Florida (Brewer et al. 2006).

Distribution, Abundance, and Habitat For the most part, the Mourning Dove was found nesting south of a line from Bissett to The Pas as depicted in The Birds of Manitoba; however, there were northern records in three squares in the Boreal Softwood Shield from Ponton to Thompson. The centre of abundance and the highest probability of observation were strongly associated with the southern Prairie Potholes, where this species was found in 96% of surveyed squares. Abundance decreased towards the edge of the Prairie Potholes and the Boreal Taiga Plains and then decreased further into the Boreal Hardwood Transition and the southern Boreal Softwood Shield. The Mourning Dove nests in a wide variety of woodlands and relatively open habitat types, including largely agricultural landscapes, but rarely penetrates beyond the fringe of heavily forested regions. Within the boreal biome, it is most frequently encountered along highways and other rights-of-way. Vagrants have wandered as far north as Churchill (Jehl 2004). Due to multiple brooding (two or more nests per season), nesting occurs throughout the summer and into September, leading to the large number of confirmed breeding records.

Trends, Conservation, and Recommendations The Mourning Dove has generally benefitted from changes to the North American landscape, notably the Canadian Prairies, following European settlement (Houston 1986, Ortis et al. 2008). BBS data show that Mourning Doves are maintaining their numbers in Canada, especially eastern Canada, but declining in Manitoba. Although there was confirmed breeding in western Winnipeg, the Mourning Dove has declined steeply as a nester in that city, despite being common in towns (R. Koes, pers. obs.). Long-time observers note a marked decrease in southeastern Manitoba (east of Winnipeg), possibly linked to increasingly intensive agriculture and the shift from cereals to pulse crops (R. Koes, P. Taylor, pers. obs.). The Mourning Dove Call Count Survey also shows declines in the area directly south of Manitoba (Ortis et al. 2008). Hunting of this widespread game bird is regulated; however, ingestion of lead shot from dove hunting and other non-waterfowl hunting has been shown to have a negative impact on this species and others (Ortis et al. 2008). Any possible impact on the Mourning Dove from the recent colonization and range expansion by the Eurasian Collared-Dove requires further investigation (Poling and Hayslette 2006). The latter species is scarce as yet in Manitoba, though abundant in parts of the Great Plains, and the Mourning Dove is common where overlap occurs.