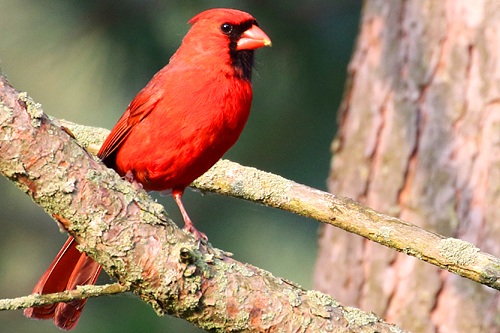 Characteristics and Range With its bright red plumage, black face mask and jaunty crest, the male Northern Cardinal is easily identified; the female has more muted colours. In Manitoba the species is a rare year-round resident at the northwestern edge of its range, which encompasses most of southeastern and southern North America from southern Canada to Belize and Guatemala. Cardinals are non-migratory but subject to juvenile dispersal (Halkin and Linville 1999); they rely heavily on feeders during Manitoba's winter months. Although the first cardinals reported in Manitoba, in the early 1930s, were dismissed as escaped cage-birds, records since that time indicate that a true range expansion has been taking place. While this expansion may be associated with a warming climate (see below), cold winters probably still act as a barrier to cardinals becoming well established in Manitoba.

Distribution, Abundance, and Habitat In Manitoba cardinals often frequent certain locations, only to disappear after a number of years. Such was the case in North Kildonan, Winnipeg, where birds were present from 2010 to 2015 and successful breeding took place in 2010. In 2011 a nest with young was found near Winkler, on the rather late date of 9 September. All breeding-season records during the atlas period occurred in the southern fifth of the province, primarily in suburban neighbourhoods and park settings, and virtually all were in the Prairie Potholes and Boreal Taiga Plains. There were sightings as far north as Thompson and Gillam during the atlas period, but these occurred during fall and winter.

Trends, Conservation, and Recommendations There has been no apparent range change since the publication of The Birds of Manitoba in 2003, and significant changes in abundance or range appear unlikely in the near future. However, it is worth noting that expansion of Ontario populations has been correlated with the northward and eastward movement of the January mean minimum isotherm of -16°C (McLaren 2007). Climate models predict higher temperatures for Manitoba over the next several decades, and this might similarly alter the range and abundance of the Northern Cardinal in western Canada (Prairie Climate Atlas 2016).