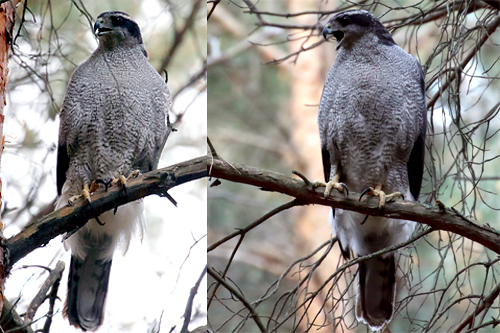 Characteristics and Range The largest of the accipiters, the Northern Goshawk is the size of a Red-tailed Hawk, but longer-tailed and shorter-winged. The adult plumage is slate grey above and pale grey below with a bold white supercilium. The goshawk's relatively short wings allow it to maneuver through densely-treed areas while hunting snowshœ hares, squirrels, grouse, and similar-sized prey. This wide-ranging species is found in boreal and temperate forests throughout the Holarctic. In North America, it nests from the treeline south to the Great Lakes, with montane populations as far south as Guerrero, Mexico (Squires and Reynolds 1997). It is largely a permanent resident, but there is some annual southward movement and large numbers migrate south during years of low hare numbers (Squires and Reynolds 1997).

Distribution, Abundance, and Habitat Atlas records were scattered throughout the province, with a notable concentration in the vicinity of The Pas. This apparent concentration is due to intensive local survey effort by an observer with a particular interest in raptors, although this area did not receive greater coverage overall than some other parts of the boreal forest. The species' secretive behaviour on the nesting grounds and its general scarcity led to low detection rates. Confusion with Cooper's Hawk is likely for some of the records in extreme southern Manitoba, although nesting in mature conifer plantations within the Prairie Potholes dœs occur, at least sporadically. It is clear from the paucity of atlas detections that the species is uncommon anywhere in Manitoba. A high degree of canopy closure is the prime characteristic of goshawk nesting habitat, both in coniferous and mixed woods. These woodlands can vary in size, but mature forest is preferred (Squires and Reynolds 1997). Hunting birds will use forests, forest edge, and marshes.

Trends, Conservation, and Recommendations Relatively large numbers of spring migrants were noted at St. Adolphe in 1974 and 1983 (presumably in years after crashes in the snowshœ hare population), but comparable movements have not been observed since then (pers. obs.), perhaps reflecting the overall downward (but statistically non-significant) trend across Canada (BBS data). Currently it is thought that logging is the primary threat to nesting populations (Squires and Reynolds 1997). Little is known about threats in wintering areas, but shooting and contamination are no longer considered significant factors. Further studies are needed on goshawk biology and population dynamics (Squires and Reynolds 1997).