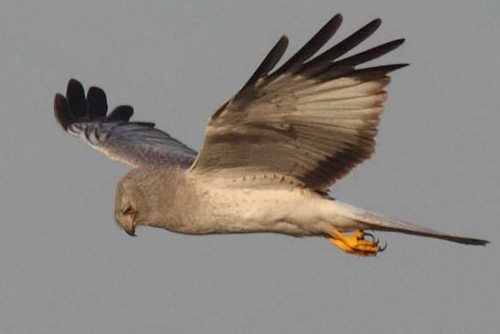 Characteristics and Range Northern Harriers are most frequently seen as they cruise low over wetlands and grasslands in search of prey. Long-winged and long-tailed, the grey males somewhat resemble gulls, while females and young have brown tones. Birds of all ages show a distinct white rump. The species is widespread, breeding across most of Canada (the main exception being parts of the Arctic) and northern U.S.A. The Hen Harrier of northern Eurasia is now considered a separate species (American Ornithological Society 2017). Northern Harriers in regions with harsh winter climates, such as Manitoba, migrate south for the winter. Birds banded in Manitoba have been recovered mainly to the south and southeast of the province, particularly in the southeastern U.S.A., where they winter (Dunn et al. 2009). The overall American winter range spans the extremes of southern Canada and (rarely) northern Columbia and Venezuela, and includes islands of the northern Caribbean.

Distribution, Abundance, and Habitat This species is widely distributed throughout the province, but relative abundance is highest in the Prairie Potholes and the Hudson Bay Lowlands. It was recorded in ~75% of all surveyed squares in the Prairie Potholes, ~60% of squares in the Arctic Plains & Mountains and ~80% of surveyed squares within 40 km of the Hudson Bay coast. It favours open habitat types and is therefore thinly distributed in the boreal forest (~35% occupancy overall), mostly in large open wetland complexes but sometimes in wetlands with young or stunted trees.Within the boreal biome, relative abundance and probability of observation are only slightly higher in the Boreal Taiga Plains than in the Boreal Softwood Shield and the Boreal Hardwood Transition. Despite this, the percentage of occupied squares in the latter (~40%) is higher than other parts of the boreal forest, perhaps due to greater survey effort. Habitat in the breeding range includes open wetlands, lightly grazed pastures, old fields, croplands, and tundra. This ground-nesting raptor apparently disappears as a breeder if woody cover exceeds 30% in northern Great Plains grasslands (Smith et al. 2011).

Trends, Conservation, and Recommendations BBS results show a steady decline of 2.2% per year in Canada between 1970 and 2012. Conversion of native grasslands to monoculture farming, destruction of wetlands through drainage, mechanized agriculture and early-season mowing appear to be major threats. In addition, widespread use of insecticides and rodenticides reduces prey availability, further threatening the species (Smith et al. 2011). Maintenance and restoration of wetlands and grasslands would benefit this species.