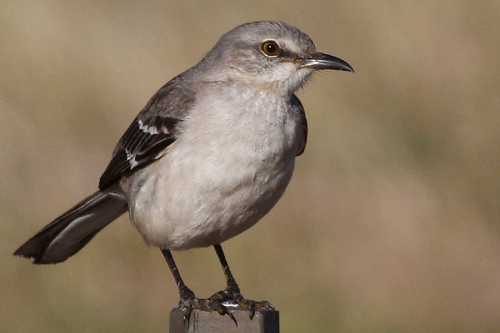 Characteristics and Range The Northern Mockingbird is approximately robin-sized but slimmer with a long tail. Its grey, black, and white plumage with white wing patches is superficially similar to Northern and Loggerhead Shrike. It is a superb songster and mimic. Its breeding range reaches from the southern fringes of Canada to Mexico and the Caribbean. The extent of migration is limited but poorly understood (Farnsworth et al. 2011).

Distribution, Abundance, and Habitat In Manitoba the Northern Mockingbird occurs as a rare wanderer and occasional breeder, with records as far north as Churchill. There are a handful of records annually, including the winter months. During the atlas period all probable and confirmed records occurred in the southern fifth of the province; confirmed breeding was established at Lyleton and St-Georges. In most other cases birds were heard and/or seen only once in suitable breeding habitat such as gardens, parks, and tree rows or copses in open country. All locations mapped during the atlas period were in the Prairie Potholes and Boreal Taiga Plains, matching the majority of historic breeding-season records. A few detections in northern Manitoba were not considered to be possible breeding evidence.

Trends, Conservation, and Recommendations There is no apparent range change since the publication of The Birds of Manitoba, but climate change might lead to a future northward expansion of the species' breeding range. Northward range expansion during the 20th and 21st centuries has been noted in eastern Canada (Erskine 1992, Smith and Poon 2007, Horn 2015).