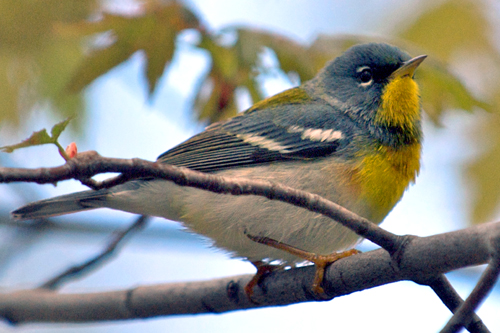 Characteristics and Range This small, subtly colourful wood-warbler is noted for its close association with arboreal lichens ("beard moss", Usnea sp.) as a nesting substrate in northern parts of its range and Spanish moss in the south. It breeds primarily from Manitoba to the Maritimes and southward to eastern Texas and the Gulf States, but with a substantial and growing gap from the American Midwest to parts of southern New England (Moldenhauer and Regelski 2012). The principal winter range extends from eastern Mexico to coastal Honduras and from the Bahamas and extreme southern Florida to Jamaica.

Distribution, Abundance, and Habitat Atlas results show a core southeastern Manitoba population in the eastern Boreal Hardwood Transition and southern Boreal Softwood Shield, with extension at low density northwestward into the Boreal Taiga Plains, especially in the Grand Rapids area, much as previously described in a sequence of distributional studies (McNicholl and Taylor 1982, Taylor et al. 1997, Taylor 2010). Abundance is quite low even in the core range, with regional averages of no more than one bird per 15 point counts, and a local maximum of detections on six of 16 point counts in one square in the Bird River area. This can be compared with a long-term average count (1977-2016) of 9.3 birds (9th highest warbler species), and a maximum of 20, on the 50-point Bird River BBS route.

Breeding habitat varies across the range, but can be summarized as mature forest, primarily riparian, with epiphytic growth (Moldenhauer and Regelski 2012).  In Manitoba the preference is for mature mixed woods with an uneven or partly open canopy and prominent growth of Usnea on old conifers, often near rivers or lakeshores or in swampy settings.

Trends, Conservation, and Recommendations BBS analysis shows generally increasing trends in the north, but decreases in large parts of the southern U.S. range. Parts of southern New England, however, have seen local reductions or extirpation in recent decades, possibly linked to the adverse effects of air pollution on epiphytes (Moldenhauer and Regelski 2012). Although not a species of global conservation concern, the Northern Parula is ranked Vulnerable in Manitoba because of its localized occurrence. Since much of the core range lies within three of Manitoba's major provincial parks (Whiteshell, Nopiming, and Hecla/Grindstone), often in the vicinity of cottage areas and campgrounds, it is important for this species to be considered in park planning. In particular, removal of "over-mature" conifers should be discouraged unless they present a clear danger to park users.