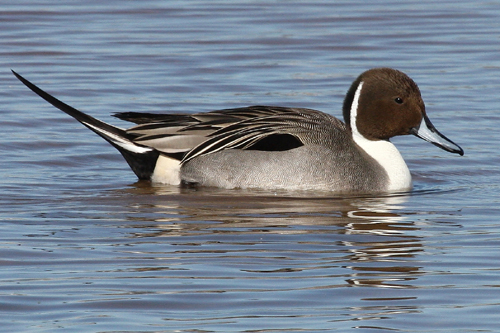 Characteristics and Range In breeding plumage, the slender, long-necked male Northern Pintail has a dark-brown head, finely patterned grey back and flanks, and pure white underparts. Female and female-like plumages are paler and less contrastingly marked than corresponding Mallard plumages. The central "pin" tail-feathers are most elongated in breeding males. The Northern Pintail breeds widely at temperate to Arctic latitudes in North America and Eurasia, and winters as far south as Central America and East Africa (Clark et al. 2014). The North American breeding range includes Alaska, most of Canada (even locally in the Arctic Archipelago), the northern Great Plains, Great Basin, and Pacific Northwest, and parts of California and Arizona. Two core regions of abundance exist: (a) the Dakotas, northern Montana, and the southern Prairie Provinces; and (b) northern Alaska and the Mackenzie delta (Baldassarre 2014). The winter range covers much of southern U.S.A., Cuba, Hispaniola, Mexico, and western Central America, and extends northward coastally to southern Alaska and Cape Cod (Clark et al. 2014).

Distribution, Abundance, and Habitat The atlas maps all show a wide separation between regions of abundance in the southwestern Prairie Potholes (mostly south of the Assiniboine River) and the Hudson Bay coast (mostly north of the Nelson River, and including the Arctic Plains & Mountains). Occurrence in the boreal forest was largely restricted to portions of the Boreal Taiga Plains and Taiga Shield & Hudson Plains, and the species was detected in just nine squares in the Boreal Softwood Shield and five in the Boreal Hardwood Transition. Province-wide, point-count detection of the Northern Pintail was one-eighth that for the Mallard, ranking fifth of the nine regularly occurring dabbling ducks. In the Hudson Bay coastal region, however, it was the most frequently detected dabbler by a substantial margin, as noted previously by Jehl (2004). Within the Hudson Bay Lowlands breeding was confirmed in 18 atlas squares and probable in a further 82, supporting Jehl's conclusion that most Northern Pintails in the Churchill region are local breeders rather than moult migrants (Jehl 2004). Seasonal and semi-permanent wetlands are preferred for breeding, and nests are placed in a variety of grassy and brushy settings, often in sparse cover. In agricultural areas, the Northern Pintail may be constrained to nesting, with reduced success, in cropland and along rights-of-way (Clark et al. 2014).

Trends, Conservation, and Recommendations Northern Pintail numbers fluctuate and populations shift with varying moisture conditions, probably more than for any other North American duck; both peaks and lows have been progressively lower since the mid-1950s, with the lowest population levels being found in 2002 (Baldassarre 2014). The long-term BBS trends for both Manitoba and Canada are significantly downward, despite many recent years with high water levels in southern Manitoba. Indeed, no North American region shows significant increasing BBS trends, either on a 10-year or 50-year basis, though statistical uncertainties are often large. Habitat loss and degradation appear to be key factors in the Northern Pintail's population reduction. Wetland restoration and conservation, together with ongoing appropriate hunting regulation, are vital for its continued abundance.