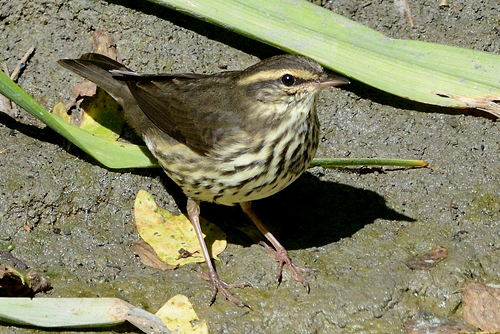 Characteristics and Range This thrush-like wood-warbler is both a skulking denizen of riparian and wetland habitats and a loud and prominent songster. It breeds across the boreal biome from Newfoundland to Alaska, south to New England, much of the Great Lakes region, and along the Appalachian and Rocky Mountains to Virginia and Wyoming respectively. There are several disjunct breeding areas in forested islands within the Great Plains and elsewhere such as in Oregon (Whitaker and Eaton 2014). The winter range is from northern Mexico and the Caribbean to northern South America (Whitaker and Eaton 2014).

Distribution, Abundance, and Habitat As noted in The Birds of Manitoba, the Northern Waterthrush breeds throughout the province except the southern Red River Valley and the extreme southwestern grasslands. Forested islands where it was found include the Turtle Mountains, the Arden Ridge, the Tiger Hills, and the upper Assiniboine and Pembina River Valleys. In the north, this species was found in nearly all squares surveyed near the Nunavut border (in 87% of the squares with ≥3 hours of effort in the Arctic Plains & Mountains and 81% in the Taiga Shield & Hudson Plains). The percentage of occupied squares decreased from north to south (only 21% in the Prairie Potholes). Relative abundance was likewise generally highest in the north as has been noted in other studies (The Birds of Manitoba). In addition to the Hudson Bay Lowlands, abundance was also high in northwestern Manitoba, contrary to the findings of Mowat and Lawrie (1955). From the far north, abundance decreased southward through the Boreal Taiga Plains (with the exception of the Manitoba Escarpment), the Boreal Hardwood Transition, and the Prairie Potholes. As noted in The Birds of Manitoba, and despite its generally boreal distribution, the Northern Waterthrush was found to be at least twice as abundant in the Turtle Mountains as in the Boreal Hardwood Transition (and elsewhere in the Prairie Potholes). Probability of observation was similarly highest along the Hudson Bay coast, although this is probably a product of both high densities and high detectability in relatively open habitats.

The Northern Waterthrush is generally found at sites near water and with dense understorey or ground cover (Whitaker and Eaton 2014). In northern Manitoba, it seems especially prevalent in willow and alder thickets, but also breeds in spruce and tamarack bogs. South of the boreal forest, this species seems more strongly tied to riparian habitat as opposed to the more varied wet and shrubby habitat types used farther north (pers. obs.).

Trends, Conservation, and Recommendations BBS data suggest a slight long-term increase across Canada, although there is no significant trend in Manitoba. However, the BBS dœs not survey the northern breeding range where peak abundances occur. This species is obviously sensitive to drainage and human disturbance to riparian habitats, and could be impacted by land-use changes that reduce the extent of wooded habitat (Leonard et al. 2008, Whitaker and Eaton 2014).