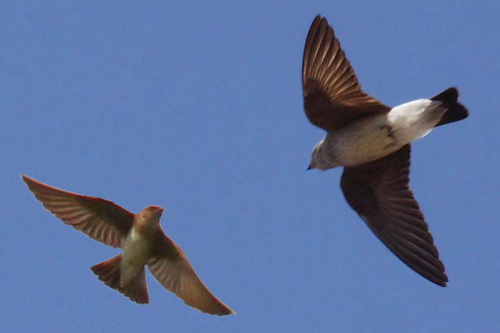 Characteristics and Range Less gregarious than other Manitoban swallows, the Northern Rough-winged Swallow is named after the tiny hooks on the leading edge of its outer primaries. Similar in appearance to the Bank Swallow, this species is larger and has a brownish wash to the throat (rather than a breast band as in Bank Swallow). It is migratory, with a wide breeding range across southern Canada and south to the Costa Rican highlands. It winters in the southern U.S.A. and across Middle America (De Jong 1996).

Distribution, Abundance, and Habitat The range documented by the atlas is similar to that described in The Birds of Manitoba, including confirmed breeding near Russell and Dauphin, but with a single outlier at the level of probable breeding on the eastern escarpment of the Porcupine Hills. No colonies were found near Gimli in the Interlake, where formerly documented, but there were possible breeding records near the Shoal Lakes. Both the breeding-evidence and probability-of-observation maps suggest the Northern Rough-winged Swallow's stronghold in Manitoba is in the southwest corner, mostly south and west of the Assiniboine River and Pembina River valleys. Probable or confirmed breeding also occurred along the Red, Winnipeg and Rat Rivers in southeastern Manitoba. Unsurprisingly, the Prairie Potholes also had the highest percentage of occupied squares and there were no records in the Boreal Softwood Shield.

The Northern Rough-winged Swallow nests in small colonies or in single pairs and is able to excavate its own burrow in clay or sand banks. It will also make use of burrows from other species, including the Bank Swallow, Belted Kingfisher, and ground squirrels, and will use anthropogenic nesting cavities such as drainpipes, culverts, and bridges (De Jong 1996). Taylor (1983) even found three pairs breeding in three small drainage holes in the Seven Sisters Falls dam in eastern Manitoba.

Trends, Conservation, and Recommendations The Northern Rough-winged Swallow is not currently a species of conservation concern although BBS trends record significant declines across Canada and the U.S.A. (Sauer et al. 2017). This is a similar pattern to other long-distant migratory insectivorous birds (Nebel et al. 2010). Declines have been attributed to habitat loss and chemical contamination (water pollution) which may affect either or both of wintering and breeding habitats (De Jong, 1996). Management and protection of nesting sites, namely riparian banks, quarries and cliffs, plus placement of artificial nesting burrows have been suggested as conservation tools for this species (De Jong 1996). Improved monitoring to assess potential population-level effects of contaminants and pesticides on this swallow and other aerial insectivores is urgently needed.