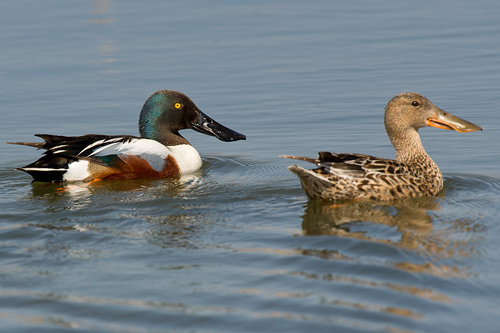 Characteristics and Range Named for its shovel-shaped bill, this dabbling duck is common in southern Manitoba, especially in the Prairie Potholes. Although the species ranges north to Hudson Bay, it is scarce or absent in most of the intervening boreal forest. This is a Holarctic breeder, ranging across northern Europe and Asia, throughout much of western U.S.A. and Canada, and in some areas around the Great Lakes north to the Gaspť Peninsula. Western Hemisphere birds winter in the southern states, Mexico, and Central America (Dubowy 1996).

Distribution, Abundance, and Habitat The distribution documented by the atlas closely matches that estimated in The Birds of Manitoba; however, this species was found in only nine squares in the Boreal Softwood Shield. Relative abundance peaked in the Prairie Potholes, especially south and west of Riding Mountain National Park, becoming moderate in the Boreal Taiga Plains (notably in the Saskatchewan River and Dauphin River wetlands), negligible in the Boreal Softwood Shield and western Taiga Shield & Hudson Plains, but then increasing again in the Hudson Bay Lowlands from Cape Tatnum to the Seal River. The probability of observation shows a similar pattern and also suggests limited occurence in the northern boreal forest. Occurrence in the Boreal Hardwood Transition is scarce and mostly associated with sewage lagoons.

The Northern Shoveler nests in shallow open wetlands, with both emergent and submergent vegetation, typically with nearby grassland or similar habitat such as sedge meadows for nesting (Dubowy 1996). This preference for upland nesting in open, grassy habitats partially explains the pattern of scarcity within the boreal forest but abundance in the Prairie Potholes and to a lesser extent in coastal fens and tundra ponds.

Trends, Conservation, and Recommendations BBS and other waterfowl survey data indicate a significant increase across Canada since 1970. Aerial surveys suggest population stability in the Boreal Taiga Plains and a significant increase of 1.2% per year in the Prairie Potholes from 1970 to 2006 (Fast et al. 2011). Due to its abundance and Holarctic distribution, the Northern Shoveler is considered to be of Least Concern globally.† This species has no doubt been helped by conservation efforts through the North American Waterfowl Management Plan.