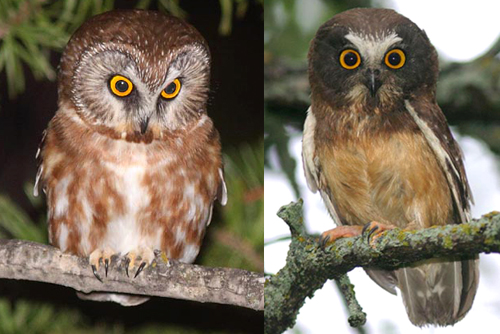 Characteristics and Range If ever a raptor could be called cute, the Northern Saw-whet Owl would fit the bill. Manitoba's smallest owl is smaller than a robin, rather large-headed, and short-tailed. It is similar in shape to the slightly larger Boreal Owl, but its plumage is warmer brown and its facial discs are not as boldly bordered in black. In addition, its beak is black, rather than the yellow of the Boreal Owl. Northern Saw-whet Owls breed south of a line from southern Alaska through the central Prairie Provinces and Ontario to Nova Scotia. In the west they range to the Mexican Highlands; in the east to states bordering the Great Lakes and into the Appalachians (Rasmussen and Sealy 2008). Although the occasional bird is found in the Prairie Provinces in winter, attempted overwintering here can be fatal, and the vast majority depart from mid-September to late October in an east-southeasterly direction. Birds banded at Delta Marsh Bird Observatory have been recaptured at four locations in Wisconsin and one in western Québec, while birds banded in Alberta, Saskatchewan, Minnesota, and Wisconsin have been recaptured in Manitoba (De Ruyck 2009).

Distribution, Abundance, and Habitat Atlas results agree largely with the provincial range as shown in the The Birds of Manitoba. The Northern Saw-whet Owl is most common in the Boreal Hardwood Transition, where just over half of the squares were occupied. Detection was considerably lower in bordering BCRs and there were no detections in the Arctic Plains & Mountains and the Taiga Shield & Hudson Plains. Probability of observation was greatest east and southeast of the south basin of Lake Winnipeg; however, early-season survey effort here was greater than in other forested areas. Nesting does sometimes occur in the southern Prairie Potholes; for example, in riparian forest along the Souris River. Abundance is difficult to ascertain, as the population fluctuates from year to year. During peak years, at intervals from 3 to 6 years, this species is the most commonly recorded owl in the province (Manitoba Nocturnal Owl Survey data; De Ruyck 2009). Between 1991 and 2015 the detection rate on the Manitoba Nocturnal Owl Survey varied from one individual detected per 70 km to 1 per 8 km surveyed, averaging 1 per 15.4 km (Duncan 2018). The species inhabits a variety of woodland habitats, especially in mixed-woods in Manitoba. The larger proportion of deer-mice (Peromyscus) in the diet (Rasmussen and Sealy 2008), as opposed to voles (the dominant prey of the Boreal Owl), may influence the saw-whet's habitat preferences and distribution.

Trends, Conservation, and Recommendations Results from CBCs and Nocturnal Owl Surveys across Canada suggest possible increases in the population since 1970, but trend reliability is low (Government of Canada 2014). Destruction of habitat, particularly the removal of nesting snags and mature forest, human encroachment, and wildfires pose the greatest threats (De Ruyck 2009).