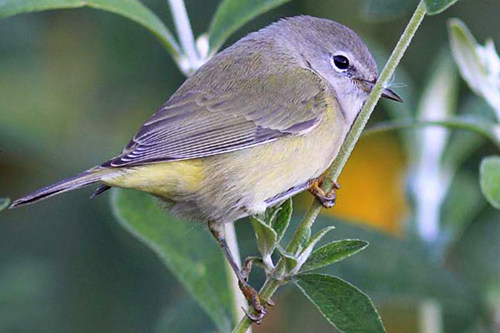 Characteristics and Range This rather plain relative of the Nashville and Tennessee Warblers has a subtle combination of grey and greenish tones. A yellow wash on the diffusely streaked underparts is strongest on the undertail coverts, while the orange crown-patch is only occasionally seen when a bird is agitated. The primary song is a trill that descends slightly in pitch at the end. The nominate subspecies, to which Manitoba birds belong, breeds in and near the boreal forest in a broad band from Alaska to Labrador, but excluding much of Atlantic Canada and barely entering the conterminous U.S.A. in North Dakota (Gilbert et al. 2010). Three other subspecies, all of which have brighter yellow coloration, occupy montane and coastal regions of western North America. The winter range is primarily coastal in the U.S.A., with a few birds as far north as British Columbia, New England, and the southern interior of the U.S.A., extending through coastal and interior Mexico to Guatemala (Gilbert et al. 2010). Migration in Manitoba averages earlier in spring and later in fall than for most wood-warblers.

Distribution, Abundance, and Habitat The Orange-crowned Warbler breeds almost province-wide, but with a prominent southeastern void in the Red River valley and most of the Boreal Hardwood Transition, even where seemingly suitable shrubby habitat exists. It is absent from much of the southwestern Prairie Potholes, except lightly wooded parts of the Spruce Woods region and other sandy, post-glacial areas or shrubby slopes. Occurrence is also marginal in the Arctic Plains & Mountains, while records in the northern Taiga Shield & Hudson Plains extend the range limit (The Birds of Manitoba) to the Nunavut land border. Highest observed abundance was in the northern boreal forest, straddling the boundary between the Taiga Shield & Hudson Plains and the Boreal Softwood Shield. Numbers fall off towards the coast and more gradually to the south, with some evident affinity for elevated portions of the Manitoba Escarpment and parts of the Interlake, such as the Ashern-Lundar area. The Orange-crowned Warbler occupies shrubby openings within the boreal forest, including wetland fringes and areas of post-fire and post-logging regeneration. It can be conspicuous at the shrubby edges of broad rights-of-way, favouring roadside point-count detection.

Trends, Conservation, and Recommendations BBS analysis shows widespread declines and a few localized increases for western subspecies. Information on boreal population trends is limited, but increasing numbers are indicated from central Alberta to western Manitoba. The overall trend for Manitoba is slightly but not significantly decreasing, while the Canadian trend is slightly and barely significantly increasing. More extensive monitoring of boreal populations is desirable, but there is no evidence of major, immediate threats, and the species' affinity for certain disturbed areas favours its continued abundance.