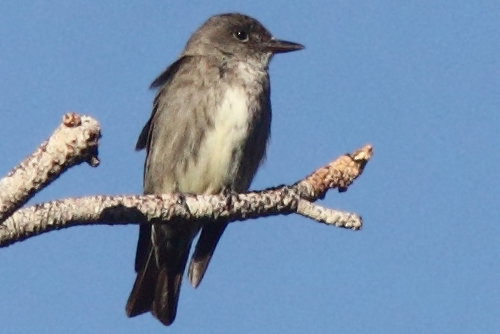 Characteristics and Range The Olive-sided Flycatcher is easily identified from other flycatchers by its large size, large head with peaked crown, stout bill, deep brownish olive-grey upperparts, and white throat, breast and belly, with contrasting olive-grey sides and flanks. It often perches in the canopy, and has a loud whistled song, popularly likened to quick-THREE-BEERS, which doubtless enhanced detections. It breeds in the Western Cordillera from Baja California to Alaska, across the boreal forest to Atlantic Canada, and in parts of the northeastern U.S.A. (Altman and Sallabanks 2012). This long-distance migrant winters mainly in Central and South America.

Distribution, Abundance, and Habitat The Olive-sided Flycatcher was found across the boreal forest, with atlas records effectively extending the known range ~200 km north of the range limit estimated in The Birds of Manitoba. The rate of detection was generally low, peaking in the Boreal Softwood Shield with detections in 38% of squares with ≥3 hours of effort, and lower in the Boreal Hardwood Transition (30%), Taiga Shield & Hudson Plains (17%), and the Boreal Taiga Plains (16%). The greatest relative abundance was found in the central boreal forest, especially the Boreal Softwood Shield. The atlas squares with the highest abundance (0.5 - 0.9 birds per point count) were in the eastern half of this BCR (especially Atlas Region 10). There was also relatively high abundance in the Porcupine Hills and Duck Mountains (but not Riding Mountain) within the Boreal Taiga Plains (highest square average of 0.3 birds per point count). Relative abundance fell rather sharply in the boreal forest's northern (treeline-tundra) and southern (boreal-parkland) transition zones and there were detections in only nine squares within the Prairie Potholes. Additional tantalizing records in the Prairie Potholes were cautiously coded as observed only, i.e., possibly late migrants rather than local breeders. This raises the possibility of limited, perhaps sporadic, breeding in southwestern Manitoba as had been suggested in the 19th century (Thompson [Seton] 1890). Observations of singing birds in late June, 2017 southwest of Riding Mountain National Park lend further support (R. Berger, C. Artuso). The Olive-sided Flycatcher occurs in swampy coniferous forest along wooded shores of streams, lakes, rivers, beaver ponds, bogs, and muskegs where snags are present. It is also found in logged areas with legacy trees and especially in burned forests.

Trends, Conservation, and Recommendations Historical breeding range contractions have been documented in the northern Appalachians since the late 19th and early 20th centuries (Altman and Sallabanks 2012), and possibly in southern Manitoba, with serious continent-wide population declines. The Olive-sided Flycatcher is now uncommon. BBS trend data show it has experienced widespread, consistent decreases since the mid-1960s, and it has recently been listed as Threatened both federally and provincially. The causes of the declines are unclear, but may be linked to habitat loss from deforestation, or to changes to insect populations on the breeding and/or wintering grounds. The highly specialized diet of flying insects, particularly bees and their relatives, makes this species vulnerable to climatic and environmental changes that depress activity or reduce availability of food and affect survival. Selective logging practices that retain snags, reducing the use of pesticides, and the appropriate modification of forest-fire management practices, such as reduction of salvage logging, in Manitoba's boreal forest would benefit this species.