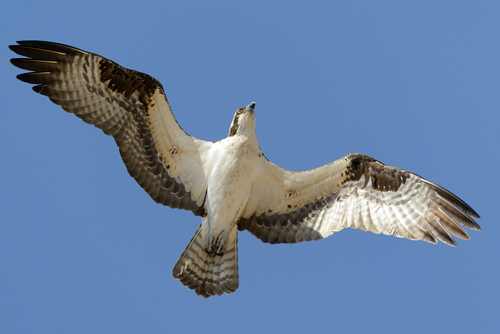 Characteristics and Range Many Manitobans will be familiar with Ospreys, as they have recently made use of artificial nesting platforms in conspicuous locations. This large, fish-eating raptor, with dark brown and white plumage, is one of the world's most widespread species, occurring on all continents, except Antarctica. The North American breeding range includes all of Canada south of the treeline (except for the prairies), Alaska, northwestern U.S.A., the east coast south to Florida, and the northern Gulf Coast and adjoining Coastal Plain (Bierregaard et al. 2016). The winter range extends from southern Oregon and Virginia south along both coasts to Central and South America and the Caribbean (Bierregaard et al. 2016)

Distribution, Abundance, and Habitat Ospreys are found throughout Manitoba during the breeding season, with the exception of the far northern area abutting the Nunavut border, areas of the extreme northeast, and most of the prairie region. Possible reasons for the absence of the species in northern regions may be the scarcity of suitable nesting trees (although nesting occasionally takes place on isolated boulders in northern lakes) or competition with Bald Eagles for nesting sites and food (The Birds of Manitoba). On the prairies a lack of water bodies suitable for fishing is the most likely reason. A failed nest along the Souris River south of Melita in the early 2000s suggests at least occasional nesting in extreme southwestern Manitoba (K. De Smet pers. comm.). Notable is the absence from Turtle Mountain Provincial Park, where Ospreys bred in the past (The Birds of Manitoba). Conversely, the nesting range has spread south along the Red River and nearby areas since the publication of The Birds of Manitoba.  This now includes nesting in Selkirk (since at least 2012) and suburban Winnipeg (since at least 2013). The vast majority of nesting records were in the Boreal Softwood Shield and the Boreal Taiga Plains, likely due to the combination of clear streams and lakes bordered by suitable nesting trees, although Ospreys do nest far from major water bodies in southeastern Manitoba (P. Taylor, pers. comm.). Although nowhere common in the province, in ideal situations several nests may be constructed in fairly close proximity. In recent years four nests on platforms have been active within a few kilometres of each other at Victoria Beach.

Arguably the highest Osprey densities in the province occur in western Manitoba. Ospreys are especially conspicuous at Overflowing River, Winnipegosis (town), and across to Lake Manitoba near Meadow Portage. There was a conspicuous absence of Osprey breeding records at Hecla, where Bald Eagles are especially numerous. This absence, as well as the distribution pattern in southeastern Manitoba where Ospreys were found nesting well away from major water bodies, may suggests some avoidance of high concentrations of Bald Eagles.

Trends, Conservation, and Recommendations The banning of persistent pesticides has greatly aided the recovery of Ospreys in the past half century and Canadian BBS data show a steady increase since the 1970s. Similarly, the building of nest platforms to divert attempts from nest construction on hydro towers, has undoubtedly saved many birds from electrocution (Vandenburgh 1993). Additional platforms would aid the species in areas where suitable nest sites may be lacking