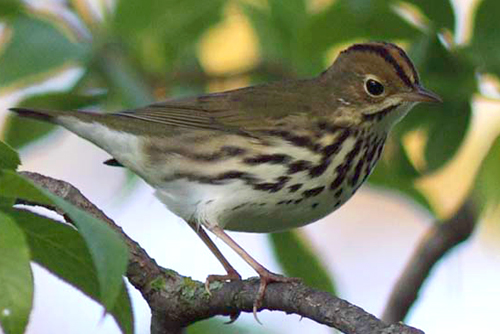 Characteristics and Range The Ovenbird is famous for the oven-like shape of its domed nest, built on the forest floor. It is a sturdy wood-warbler related to the waterthrushes, most often detected by its song, a crescendo of tea-cher tea-cher phrases. Both sexes are unmarked olive above and boldly streaked black-and-white below, with prominent pale eye-rings and a dark-bordered orange crown patch. The breeding range extends from the eastern edge of the Rockies across much of the boreal and temperate eastern forests and wooded parts of the northern Great Plains to the Atlantic Coast (Newfoundland to the Carolinas), and also reaches northern parts of the U.S. Coastal Plain. BBS analysis indicates a core range from southeastern Manitoba through the northern Great Lakes to the Maritimes and southward through the Appalachians. The winter range is primarily in Mexico and Central America, peninsular Florida, and the Caribbean, with rare occurrences in northern South America. The Appalachians appear to form a divide between populations wintering in the Caribbean region and in southern Mexico and Central America (Porneluzi et al. 2011).

Distribution, Abundance, and Habitat Atlas records confirm widespread occurrence in the southern two-thirds of Manitoba, and help refine the Ovenbird's effective northern range boundary, about 100 km south of the northern edge of the Boreal Softwood Shield (see The Birds of Manitoba). Isolated northerly records include two in the Hudson Plains, near Gillam and Shamattawa. Two previous Churchill records appear to have involved spring 'overshoots' (Jehl 2004). Occurrence in the Prairie Potholes is patchy, with evident avoidance of intensive agriculture and concentration in wooded regions, especially near the Manitoba Escarpment. Patterns of relative abundance and probability of observation are broadly similar, emphasizing southern and (secondarily) central portions of the boreal forest, plus a zone of surprisingly high abundance towards the northern range limit, northeast of Lake Winnipeg. This reflects the Ovenbird's preference for large tracts of relatively mature, closed-canopy deciduous and mixed-wood forest, as well as mature jack pine stands, all with sparse understorey (Porneluzi et al. 2011).

Trends, Conservation, and Recommendations The Ovenbird is not a species of global conservation concern. Given its apparent sensitivity to forest disturbance, the stable overall population trends indicated by BBS analysis are both surprising and encouraging. To conserve Ovenbird numbers, Porneluzi et al. (2011) recommend that forest management should aim to maximize the area of habitat more than 100 m from any disturbance, with a minimum undisturbed block size of 500 to 1000 ha—goals that would doubtless benefit many other forest birds.