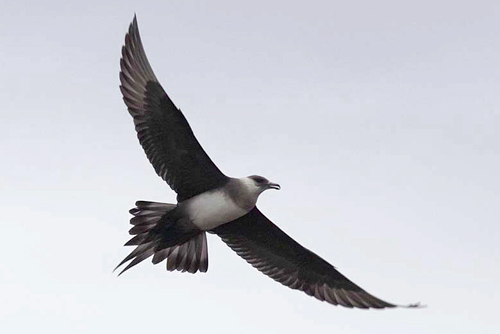 Characteristics and Range Famed for the aerial agility with which it steals food from other seabirds, the Parasitic Jaeger breeds across the Arctic, including the subarctic Hudson Bay Lowlands. It is rarely seen in southern Manitoba, except for occasional stray migrants on their way to their wintering range, which spreads from coastal North America and the Caribbean to South America waters (Taylor 1993, Wiley and Lee 1999).

Distribution, Abundance, and Habitat Similar to the range depicted in The Birds of Manitoba, 94% of the 65 squares with breeding evidence of Parasitic Jaeger were within 75 km of the Hudson Bay coast. Nonetheless, possible and probable breeding evidence occurred in three squares at Nejanilini Lake (~160 km inland) and there was a single record at Nueltin Lake (~280 km inland at the Nunavut border), despite the species being absent in other well-surveyed northern squares. It therefore remains unclear if the Parasitic Jaeger breeds in a continuous band across the Nunavut land border or if there are disjunct breeding sites by some large inland lakes, as predicted by the probability-of-observation analysis.

Trends, Conservation, and Recommendations Although generally considered stable, a small declining trend was estimated for June observations of Parasitic Jaegers in Wapusk National Park from 1980 to 1996 (Rockwell et al. 2009). Climate change may result in a drying of the tundra and ponds (Harlan et al. 2015, van der Kamp and Marsh 2013) and a consequent potential loss of breeding habitat for this species.