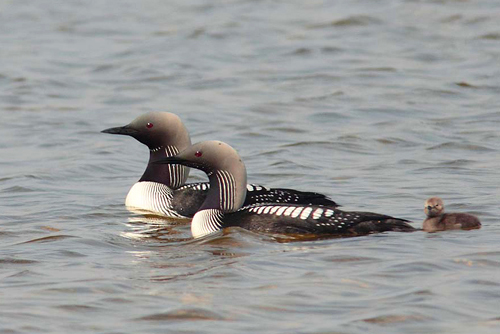 Characteristics and Range Arguably the handsomest of all the loons, the Pacific Loon's plumage during the breeding season is a delicate melange of black-and-white checkered upperparts, pearl-grey crown and nape, black throat and fine black-and-white streaking on the neck and breast. It is somewhat smaller than the Common Loon, with a more slender bill and a thicker neck. The Pacific Loon was split taxonomically from its near-identical Eurasian relative the Arctic Loon in 1985. It nests in tundra regions from the Far East of Russia east to Labrador, but not quite as far north as the Red-throated Loon. It winters along the Pacific coast from Alaska to Mexico, and smaller numbers winter in northeastern Asia (Russell 2002). Manitoba breeders are believed to migrate overland to and from the Pacific Ocean (The Birds of Manitoba). Mid-continent sightings are extremely rare; indeed, there is only one confirmed record, on 24 October, 1998, in southern Manitoba (The Birds of Manitoba).

Distribution, Abundance, and Habitat Pacific Loons were widely distributed in a continuous stretch from the lower Hayes River to the Nunavut border, up to 100 km inland, with an outlying population at Nejanilini Lake, about 170 km inland. Pacific Loons were seen in nearly every square in the Arctic Plains & Mountains that received some coverage. Abundance was greatest in the Churchill - Cape Churchill region, although it should be stressed that coverage there was much greater than elsewhere. Probability of observation was greatest in the same area. Jehl (2004) mentioned a tally of 6-7 nests annually in a 1.7-km˛ coastal area near Churchill. The Pacific Loon uses lakes of a variety of sizes for nesting, from 0.2 ha (minimum size for take-off) to 365 ha (averaging 2 - 107 ha in different studies in different regions). It typically nests in larger ponds than used by the Red-throated Loon and, when nesting on larger lakes, prefers protected bays sheltered from wave action (Russell 2002). Nests are located on small vegetated islets or along the edges of the lakes, often partially hidden by low willows. Adults commute from the nesting lakes to Hudson Bay to fish, although small invertebrates captured at the nesting lakes may also be fed to recently-hatched young (Jehl 2004). Inland breeders find food on large lakes, such as Nejanilini Lake.

Trends, Conservation, and Recommendations Although much of the breeding range is not covered by the BBS, there is some suggestion of a decline in Canada, albeit with low reliability. Climate change and severe weather may pose threats to this species. There are no specific recommendations for Manitoba, although there is concern that a proposed road from Churchill to Arviat could have an impact on sensitive species such as loons.