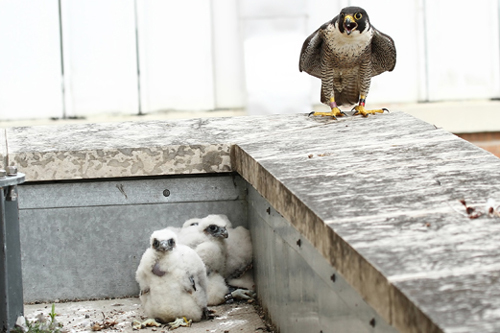 Characteristics and Range The well-known Peregrine is a large falcon, comparable in size to a large Cooper's Hawk. Adults are bluish-grey above, pale below with dark barring or spotting, and have a prominent dark stripe or "moustache" from the eye downward. Females are ~20% larger than males and more heavily marked below, while juveniles are browner overall, often with a pale crown. One of the most widespread birds in the world, the Peregrine Falcon nests on every continent except Antarctica. In North America, it nests across the Arctic and on the Atlantic and Pacific coasts, and at scattered locations, including many cities, across the continent. Overwintering occurs from the Alaska Panhandle and the St. Lawrence River, south along both coasts, through much of Middle America to parts of South America (White et al. 2002). Winter sightings in Manitoba are extremely rare.

Distribution, Abundance, and Habitat Distribution, Abundance, Habitat Manitoba breeding records are mainly associated with urban nesting (typically using ledges on tall buildings) in Winnipeg, Brandon, and Selkirk. There were additional records in one square in the Boreal Softwood Shield and in four squares in the Taiga Shield & Hudson Plains. It is possible that some of the southern Manitoba records may pertain to non-breeders, early or late migrants, or birds hunting dozens of kilometres away from their nest. Sightings in the boreal biome are intriguing because very little suitable nesting habitat (large cliffs) occurs in these areas, although there are historical reports of probable nesting in the southern boreal forest (The Birds of Manitoba). The species' historical reliance on cliff ledges for nesting probably severely limits nesting opportunities in Manitoba away from buildings and other tall structures, so this falcon has probably always been an uncommon nester here (The Birds of Manitoba). Peregrine Falcons have nested annually in downtown Winnipeg since 1989, following reintroduction of captive-bred birds starting in 1981 (The Birds of Manitoba), and less regularly in other parts of Winnipeg, Brandon, Selkirk, and Portage la Prairie since then. Away from urban areas with concentrations of Rock Pigeons (a favoured prey item), most sightings in southern Manitoba are at large wetlands, such as Whitewater Lake and Oak Hammock Marsh, where both migrants and local-breeding "commuters" hunt waterfowl and shorebirds (The Birds of Manitoba).

Trends, Conservation, and Recommendations Trends, Conservation, Recommendations Peregrine Falcon populations underwent massive declines in North America from the 1940s to the 1970s due to low nest success associated with the use of pesticides (White et al. 2002). With the banning of DDT and related insecticides, captive breeding and release programs contributed to recovery of the species, beginning in several North American cities in the 1960s and in Manitoba in the 1980s. BBS data are insufficient to show population trends in Canada, but increases have occurred continent-wide since the 1980s. The Peregrine Falcon was formerly given different status assessments by subspecies in Canada but Manitoba birds, which fall under the combined anatum/tundrius population, are no longer considered at risk, having been down-listed to Special Concern in 2012 then removed in 2017. Manitoba's urban-nesting pairs are monitored by the Peregrine Falcon Recovery Project but migrants are not well counted by hawk watches because of the late date of spring migration of northern birds.