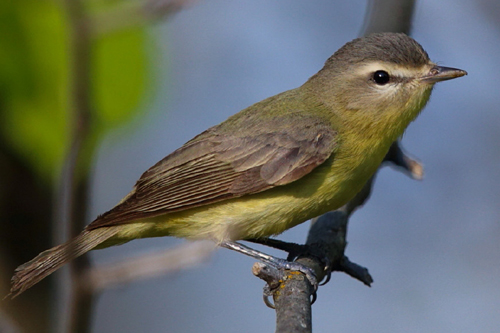 Characteristics and Range This small, enigmatic vireo is greyish-green above with a yellow wash to the pale underparts, most intense on the upper breast. Facial markings, including dark lores and pale supercilium, are often indistinct, and poorly marked individuals may be confused with the Warbling Vireo. The Philadelphia Vireo's song closely resembles that of the Red-eyed Vireo, but is slower, with shorter, less strongly inflected phrases. Interspecific territorial relationships between these two vireo species have been studied in some detail ( Moskoff and Robinson 2011 ). The Philadelphia Vireo's mostly boreal breeding range spans Canada from eastern British Columbia to Newfoundland, extending just slightly into the U.S.A. in northern parts of Minnesota, Michigan, and New England, with small, disjunct populations in North Dakota and upstate New York (Moskoff and Robinson 2011). The connection with the City of Brotherly Love (i.e., Philadelphia) is purely migratory. The winter range seems largely restricted to Central America from Honduras to Panama, though possibly extending to southern Mexico and northwestern Colombia ( Moskoff and Robinson 2011 ).

Distribution, Abundance, and Habitat Caution is needed in interpreting the frequency of detection and apparent abundance of the Philadelphia Vireo, because of the special difficulty of song and sight identification. There is no doubt that it is much less abundant than the Red-eyed Vireo, but this is probably exaggerated by the problem of detection. Atlas data indicate markedly higher detection rates in the Boreal Taiga Plains (18% of squares with ≥3 hours of effort) and Boreal Hardwood Transition (17%) than in the Boreal Softwood Shield (7%) and Prairie Potholes (7%), with minimal occurrence in the Taiga Shield & Hudson Plains. Within the Boreal Softwood Shield, scarcity of records east of Lake Winnipeg contrasts with more frequent detection north of the lake, significantly modifying the estimated range limit in The Birds of Manitoba. Highest abundance was found in regions west of Lakes Manitoba and Winnipegosis, but with apparent avoidance of higher elevations on the Manitoba Escarpment. These distributional features are difficult to interpret, perhaps amplifying rather than clarifying this vireo's reputation as one of North America's most obscure birds (Moskoff and Robinson 2011).

Tall deciduous trees are a common feature of the Philadelphia Vireo's preferred habitats in Manitoba, which range from mature riparian woods with a mixture of deciduous species (e.g., poplar and ash) to large aspen woodlots in farmland, and isolated aspen groves skipped by fire or clearcutting (including roadside buffer strips) in the boreal forest. Though reputed to favour early-successional to mid-successional deciduous woods and woodland edges, Philadelphia Vireos tend to nest and forage higher than Red-eyed Vireos in the deciduous canopy (Moskoff and Robinson 2011).

Trends, Conservation, and Recommendations The reliability of BBS-derived trends for the Philadelphia Vireo is diminished by generally low numbers, compounded by detection challenges and limited range coverage. Nevertheless, survey-wide trends are significantly positive, albeit with a suggestion of declines (not statistically significant) in Manitoba and Saskatchewan. Conservation concern is generally low, but this species has been identified as a good target for management in large tracts of commercial forest (Moskoff and Robinson 2011).