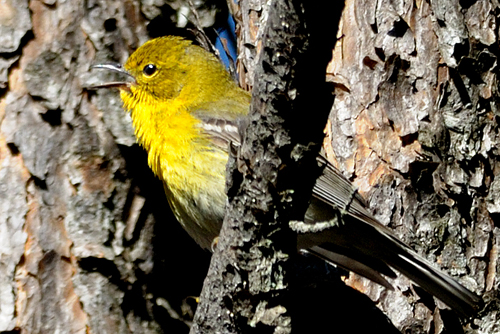 Characteristics and Range The adult male Pine Warbler has a yellow breast with indistinct dusky streaks, an unstreaked greenish back, and double white wingbars. Females and especially juveniles are less colourful and resemble fall-plumage Bay-breasted and Blackpoll Warblers. The male's song can easily be confused with Chipping Sparrow and other species with simple trills. Manitoba is at the northwestern tip of the Pine Warbler's breeding range, which extends discontinuously across southeastern Canada to the Maritimes and through forested portions of the eastern U.S.A. There may be a small population in eastern Saskatchewan and there are records in Riding Mountain (e.g. four males found singing in July, 1942, Soper 1953). Except for localized, resident races and perhaps a few migrants in the Caribbean, plus some northern lingering birds and vagrants elsewhere, the Pine Warbler winters entirely within the southeastern U.S.A., corresponding roughly to the southern third of the breeding range (Rodewald et al. 2013).

Distribution, Abundance, and Habitat Detection in 19 atlas squares in the Boreal Hardwood Transition improves the accuracy of the narrow sliver of range estimated in The Birds of Manitoba, while the discovery of Pine Warblers in six central Interlake squares (Boreal Taiga Plains) supports the previous suspicion of breeding there. The relative-abundance and probability-of-observation maps suggest this outlying population could be provincially important. In general, the Pine Warbler occurs in pine forest or in mixed-wood forest with a significant pine component. In Manitoba, it selects mature jack pine stands with a closed canopy and sparse understorey, usually on sandy substrates, but not the sparser, open-canopy stands or dense young post-fire growth typical of the Canadian Shield. The nest is usually placed on a branch or fork high in a pine tree (Rodewald et al. 2013).

Trends, Conservation, and Recommendations The Pine Warbler is not a species of global conservation concern, but retention of a Manitoba population is desirable. With just 17 point-count detections, it was the least frequently detected of Manitoba's confirmed breeding warblers. Numbers are too low to yield reliable BBS trends here, but the positive trend for Canada and northeastern U.S.A. is supported by the "explosive population growth" in Ontario (Crins 2007), while the species has "taken New Brunswick by storm" (Stewart 2015). This broad increase, combined with the newly discovered Interlake population, augurs well for the Pine Warbler's future in Manitoba. Nevertheless, there has been some recent habitat loss in the province to logging, sand and gravel extraction, and mistletœ control measures. While no causes of high unnatural mortality have been identified in Manitoba, negative factors elsewhere include collision with tall buildings, pesticide use, replacement of old-growth pine forest by uniform-aged plantations, habitat fragmentation and modification (including fire suppression), and suburbanization. Selective timber-harvesting practices can be beneficial (Rodewald et al. 2013). Because of the low numbers in Manitoba, improved monitoring and key habitat identification are recommended, and the species' welfare should be addressed in provincial pine-forest management strategies (including in plantations).