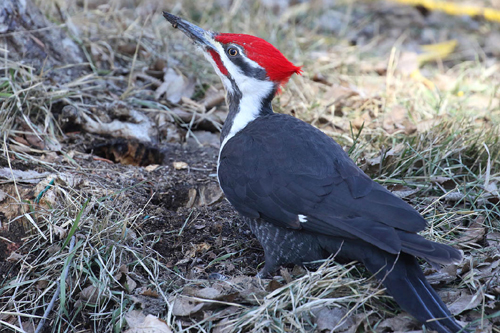 Characteristics and Range The Pileated Woodpecker is the largest woodpecker in Canada. Best recognized by its large, dull black body and red crest, with a striking black-and-white pattern on neck and underwing, it is a permanent resident of mature forests in southern Canada and the U.S.A. It resides from the Gulf Coast to the Maritime Provinces, skirting the fringes of the Great Plains, but extending north onto the Canadian Shield and west to the northern Rocky Mountains and Pacific Coast (Bull and Jackson 2011). This species excavates large cavities in trees, which are used by some secondary cavity nesters such as owls and ducks, as well as pine martens and bats (Bull and Jackson 2011). Especially where natural sites are limited, it may nest in electrical utility poles (Millar 1992).

Distribution, Abundance, and Habitat The atlas distribution of the Pileated Woodpecker is similar to that shown in The Birds of Manitoba; however, some possible breeding records extend the range northward as far as the Hayes River in the northeast, along the Burntwood and Nelson Rivers, and northwest to Southern Indian Lake. Further northward range extensions are unlikely because of habitat limitations. The core areas of highest abundance are located primarily in the Boreal Hardwood Transition and the Boreal Taiga Plains, wherever open, deciduous-dominated mixed-woods are found. The low but increasing relative abundance of this species throughout the Prairie Potholes is tied mainly to remnant aspen woodlots and riverbottom forests, and to areas of large white spruce trees, snags and logs that contain carpenter ants or other large, wood-dwelling insects. The relative abundance and probability of observation diminish from south to north in the Boreal Softwood Shield, likely because of reduced tree size and declining nesting and foraging opportunities.

Especially in remote areas, atlas detections were enhanced by the extremely loud vocalizations and characteristic drumming of this species. A noteworthy cluster of records occurred in the Taiga Shield & Hudson Plains region along the Hayes and Gods Rivers. Here, river valleys and ravines may support the growth of large white spruce and trembling aspen, which are important components of Pileated Woodpecker habitat. Suitably sized trees do not grow in the deep, organic peatlands and black spruce forest that dominate the surrounding landscape.

Trends, Conservation, and Recommendations The Pileated Woodpecker is widespread and considered Secure provincially. BBS and CBC data show this species has increased substantially in much of its range since the 1970s. Increases, especially in the Prairie Potholes, appear to be linked to trees reaching larger diameters for a variety of reasons that may include maturation of planted trees, fire suppression, retention of some large trees in land management, and possibly climate change. Illegal shooting of woodpeckers has probably declined as a source of mortality; however, ground foraging makes this species vulnerable to vehicle collisions (Bull and Jackson 2011). Maintenance of large trees in woodlots and riparian habitats of the Prairie Potholes and selective logging practices that retain large trees, snags and logs in the boreal forest would benefit this species.