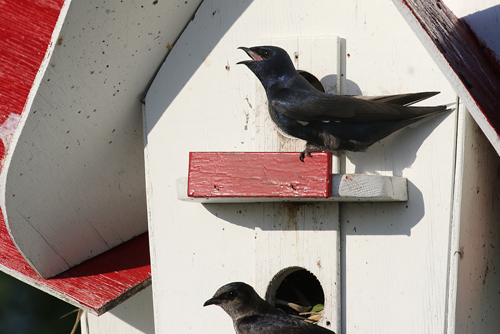 Characteristics and Range A popular species due its propensity for nesting in hollow gourds and nest boxes, sociable behaviour, and an appetite for eating insects, this is North America's largest swallow. The iridescent purple-blue adult male is the only dark-bellied swallow in North America, although the female is paler (Brown and Tarof 2013). Purple Martins breed from northeastern Mexico, throughout eastern North America south of the boreal forest and as far west as central Alberta (Brown and Tarof 2013). Unusual for a primarily eastern species, there are small breeding populations on the Pacific coast, including Vancouver Island and vicinity. Purple Martins overwinter in lowland South America east of the Andes, primarily in Bolivia and Brazil. The relationship between humans and Purple Martins predates the arrival of European settlers: Purple Martins traditionally nested in empty gourds provided by indigenous North Americans (Morton 1988). Although Purple Martins still breed in woodpecker cavities in dead snags in some montane areas of North America, the majority now nest in martin houses, including elaborate communal designs, in suburban and rural settings.

Distribution, Abundance, and Habitat The Purple Martin breeding range is centred in south-central and southwestern Manitoba, in and around human settlements, and generally south of the boreal forest. This species strongly associates with the Prairie Potholes, being present in ~40% of squares in this region, and along the transition zone with the Boreal Taiga Plains. Its range extends northwards to Swan River in western Manitoba and to Gypsumville in the Interlake. The distribution documented by the atlas is slightly reduced from that that described in The Birds of Manitoba, where this species was noted to breed in The Pas. Likewise, the species' breeding distribution in the Boreal Hardwood Transition east of the Red River valley is limited to squares corresponding to human settlements and cottage areas, and is much reduced since the 1980s in the Pinawa - Lac du Bonnet area (Taylor 1983). Even in Winnipeg, the population is much lower than in the 1980s and 1990s (R. Koes, pers. obs.). Probability of observation is highest around Winnipeg and the Red River valley, the area from Dauphin to Winnipegosis, and towns in southwestern Manitoba. Relative abundance is highest near population centres, especially along the western shore of Lake Manitoba, the southern and central Interlake, towns north of the Turtle Mountains such as Boissevain and Deloraine, where there are large martin "condominiums", north to Roblin.

Trends, Conservation, and Recommendations In common with other long-distance migrant aerial insectivores, long-term BBS trends in North America have been downward since the 1970s ((Nebel et al. 2010, Sauer et al. 2017). These trends are probably due to issues on the breeding grounds rather than loss of wintering habitat (Fraser et al. 2012). Nebel et al. (2010) suggested a link with fewer flying insects and implicate threats such as acid rain and pesticide use. A short-term inability to adapt to climate change is another possible contributory factor. Interspecific competition for artificial nesting habitat with two invasive non-native species, the House Sparrow and European Starling, may also be significant (Brown and Tarof 2013). These two species are able to occupy nesting structures before martins arrive to breed. Advice on improving breeding success for this species is available from the Purple Martin Conservation Association.