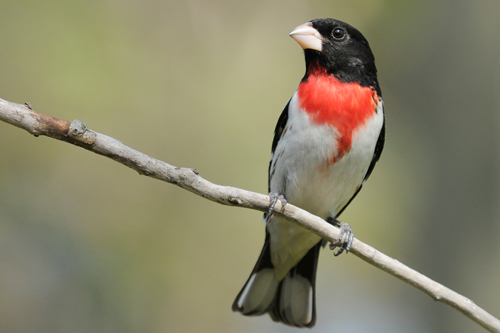 Characteristics and Range This large and striking forest songbird is distinctive by sight and sound, sometimes described as a "robin that took singing lessons". It is an eastern North American species, breeding from southernmost Newfoundland south to Virginia and west to the Missouri River, as well as extending in a band across the southern boreal forest and aspen parkland from Manitoba to southeastern Yukon east of the Rocky Mountains. It winters from Mexico and the Caribbean south to northern South America (Wyatt and Francis 2002).

Distribution, Abundance, and Habitat The Rose-breasted Grosbeak was found in a very high proportion of squares in southern Manitoba, corresponding to the Prairie Potholes (55% of squares with ≥3 hours of effort), the southern portion of the Boreal Taiga Plains (59%) and the Boreal Hardwood Transition (93%). Detections north of a line from Bissett to The Pas were few and scattered. Possible breeding records in two squares near Lynn Lake and two squares near Gillam extended the known breeding range northwards (albeit sparsely) from that estimated in The Birds of Manitoba by ~350 km in the west and ~400 km in the east.

Mostly a deciduous woodland species, the Rose-breasted Grosbeak breeds in a variety of forest types but rarely in pure coniferous stands (Wyatt and Francis 2002). It is not restricted to mature woodlands but also breeds at forest edges, wetland edges, stunted aspen-oak woods, as well as shrubby second growth (Wyatt and Francis 2002). This species is prominent in tall, dense willow stands such as those that develop after logging of wet coniferous forest, and at field/forest edges where land clearing has been halted (P. Taylor, pers. comm.). In extreme southwestern Manitoba, and in urban areas, it is more restricted to riparian forests. Relative abundance was highest in the Boreal Hardwood Transition and the southernmost Boreal Softwood Shield, decreasing slightly towards the Ontario border, presumably as coniferous trees become more dominant. Likewise, relative abundance decreased westward through the southern portion of the Boreal Taiga Plains and into the Prairie Potholes, where woodlands become increasingly fragmented. In addition to the peak in southeastern Manitoba, there was equally high abundance along the slopes of the Manitoba Escarpment from Riding Mountain to the Duck Mountains and eastward into the southern Interlake, an area that is also characterized by considerable woodland and shrub habitats. The probability of observation is highest in a band from the Boreal Hardwood Transition around, but not including, the Prairie Potholes to the Porcupine Hills.

Trends, Conservation, and Recommendations There is no significant BBS trend for this species in Manitoba or Canada, although there is a long-term decline in the Boreal Hardwood Transition overall and in some eastern portions of the range. Habitat fragmentation may negatively impact the productivity of this species but forest maturation (as a result of fire suppression, for example) may also impact nesting (Wyatt and Francis 2002). This suggests that carefully designed forestry management can benefit this species and others that prefer intermediate age classes of forest.