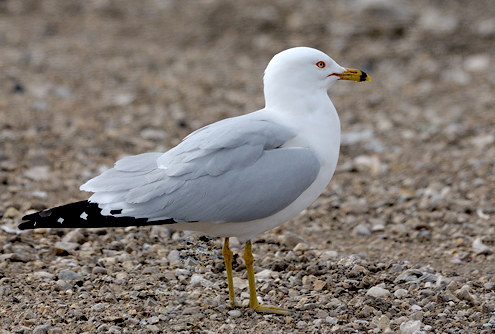 Characteristics and Range The adult Ring-billed Gullis a medium-sized, white-headed gull, best distinguished from the larger Herring Gull by its yellow legs and dark band towards the bill tip. It breeds almost Canada-wide, excluding the Arctic, from the B.C. interior and Great Slave Lake to Newfoundland, and across the northern U.S.A. from the Pacific Northwest to the Great Lakes and northern New England. It winters coastally from Mexico to southern New England and British Columbia, inland across the southern U.S.A. and northern Mexico, and in varying numbers on the lower Great Lakes; a few wander much farther (Pollet et al. 2012). Based on records of Saskatchewan-banded birds (Houston and Houston 2006), Manitoba breeders likely overwinter mainly in Mexico and the Gulf States.

Distribution, Abundance, and Habitat This is the most widespread breeding gull in Manitoba, overlapping and often associating with Franklin's Gull in the prairies and with the Herring Gull in the boreal forest. It nests primarily on islands, reefs, and sandbars in large and medium-sized lakes and major rivers, often feeding in nearby farmland and at dumps when available. Atlas records extend virtually province-wide, but many of the possible breeding records away from lakes likely refer to a combination of long-distance commuters and non-breeding visitors. The greatest concentration of confirmed breeding records was in and near the Boreal Taiga Plains. The lack of confirmed breeding in the immediate coastal region is consistent with Jehl's assessment of the species as a common summer visitor at Churchill, though two colonies were known to him just 20 and 50 km from town (Jehl 2004). Ring-billed Gull numbers have greatly increased at Churchill since the 1980s, possibly suggesting more nearby breeding (R. Koes, pers. obs.).

An aerial survey of Lakes Manitoba, Winnipeg, and Winnipegosis and adjoining areas in 2012 produced an estimate of 41,819 pairs of Ring-billed Gulls at 67 colonies (Wilson et al. 2014), indicating increased abundance since the previous intensive survey in 1979 (Koonz and Rakowski 1985). The two largest colonies found in 2012 contained 3,772 nests (Dawson Bay, Lake Winnipegosis) and 3,075 nests (Lake St. Martin). Boat surveys of medium-sized boreal lakes in west-central Manitoba and east-central Saskatchewan in 2011 revealed 3,752 adults at 16 colonies, or 2.7 adults per square kilometre of lake (Wilson 2013). Also in 2011, a year of high lake levels, a large colony was located in a disused quarry at Grand Rapids, but it was subsequently abandoned (pers. obs.). Recent establishment of at least four colonies on the Winnipeg River indicates "infill" range expansion since the early 1980s (Taylor 1983, pers. obs.). Rooftop nesting was noted in Winnipeg in 2001 (The Birds of Manitoba), but not during the atlas period.

Trends, Conservation, and Recommendations The Ring-billed Gull rebounded dramatically after decimation between 1850 and 1920, especially in eastern North America; numbers continue to increase, with a total population now in the millions (Pollet et al. 2012). Though it is a beneficial consumer of insects in farmland, this gull has become a pest at resort beaches and in some urban areas, as well as an aviation hazard (Environment Canada 2005). Encroachment on Common Tern and Piping Plover breeding habitat is also a concern (Pollet et al. 2012). Management is therefore focused more on control than conservation, but maintenance of healthy numbers for all colonial waterbirds on Manitoba's major lakes is a high priority.