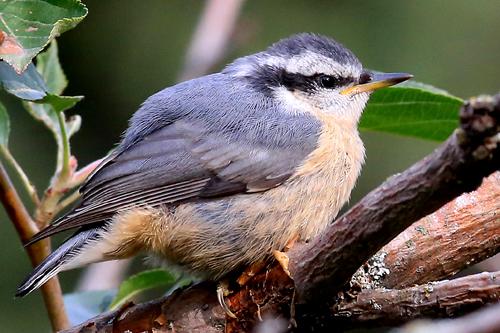 Characteristics and Range Easily identified as a nuthatch by its upside-down antics, this species is distinguished from its white-breasted relative by smaller size (barely half the mass on average), bold dark eye-lines, and high-pitched "toy trumpet" song and calls. The cinnamon wash on the underparts varies in intensity, generally paler in females than males, and barely visible in some individuals. The breeding range spans forested regions from southeastern Alaska across Canada to Labrador, southward to the Great Lakes and the Appalachians, and through the Western Cordillera to southwestern U.S.A. Non-breeding movements in variable numbers cover the entire conterminous U.S.A., except for a few extreme southern areas, but the species rarely ventures into Mexico (Ghalambor and Martin 1999). Though the breeding range is often depicted as permanent throughout, Red-breasted Nuthatches normally withdraw or reposition for the winter months, apparently responding to spruce and fir cone crops and secondarily to feeder availability.

Distribution, Abundance, and Habitat Atlas detection was much higher (74% of squares with ≥3 hours of effort) in the Boreal Hardwood Transition than in the Boreal Softwood Shield (40%) or the Boreal Taiga Plains (39%), with only one Taiga Shield & Hudson Plains record (along the Hayes River). The Boreal Hardwood Transition percentage may be biased by high coverage. In the Prairie Potholes (9%), there is a cluster of records in the Spruce Woods region, plus scattered records elsewhere suggesting an association with planted conifers. Computed relative abundance and probability of observation emphasize to varying degrees the Duck Mountains, Porcupine Hills, the shield area between The Pas and Flin Flon, the eastern shore of Lake Winnipeg's north basin, and the southern half of the Ontario border region. These patterns seem to reflect the Red-breasted Nuthatch's affinity for forest with a large component of mature balsam fir and/or white spruce.

Trends, Conservation, and Recommendations Red-breasted Nuthatches often give the impression of fluctuating breeding numbers from year to year at a local level, but overall atlas detection did not vary greatly except for a dip in 2014, suggesting high mortality during the exceptionally cold preceding winter. From year to year, winter numbers in Manitoba vary from local abundance to near-absence, with CBC evidence of an underlying peak-to-peak increase, suggesting increased northerly wintering, possibly linked to climate change. BBS data analysis shows broadly increasing trends in central and eastern portions of the range, including Manitoba, but widespread declines in northwestern regions. While overall conservation concern for this species is low, it stands to benefit from improved forestry best management practices. The importance of leaving soft (rotting) snags after logging for weak excavators such as the Red-breasted Nuthatch (as compared with woodpeckers) has been emphasized (Ghalambor and Martin 1999).