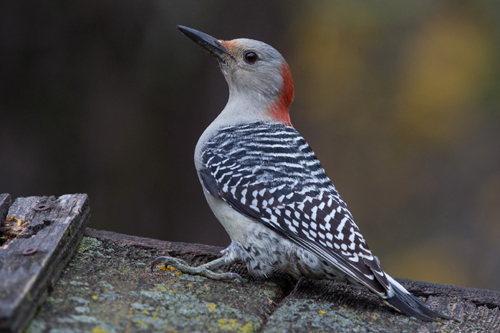 Characteristics and Range At the size of a Hairy Woodpecker, the Red-bellied Woodpecker is a colourful bird with black-and-white barring on the back and wings, a white rump and pale buffy underparts. Adult males sport a bright red crown and nape, while females show red only in the nape. The name of the bird is unhelpful as the red on the belly is barely visible in the field. The loud "quiir" call often betrays the presence of this woodpecker. It is essentially a bird of the eastern U.S.A., from the Dakotas south and east to Florida. In Canada it is a regular breeder only in southern Ontario. Its range has greatly expanded northward and westward during the latter half of the 20th century (Shackelford et al. 2000). Although largely a year-round resident, there is some dispersal in fall and winter, which accounts for most of the sightings in Manitoba.

Distribution, Abundance, and Habitat There were only two possible breeding records during the atlas years, both around Winnipeg. Other sightings during this period were thought to have involved dispersing birds (fall and winter). There are ~200 records in total in Manitoba, mostly from October to March, but there are also several during the breeding season. It was, therefore, surprising that there never had been solid evidence of nesting in the province, although observations in Kildonan Park, Winnipeg in 1941 and 1942 and at Whitemouth in 1952 were highly suggestive (i>The Birds of Manitoba). The presence of a pair (or pairs) throughout the summers of 2016 and 2017 along the Red River in St. Norbert and St. Adolphe eventually led to the discovery of a nest in May, 2018 by Andy and Sandra Courcelles. Most Red-bellied Woodpeckers in Manitoba have been found in mature, deciduous river-bottom forest in the Prairie Potholes, with occasional sightings in mixed woods in the Boreal Hardwood Transition and the southern reaches of the Boreal Taiga Plains and Boreal Softwood Shield. This species is a frequent feeder visitor in other regions and many Manitoba sightings involve feeder visits.

Trends, Conservation, and Recommendations This woodpecker is apparently secure and expanding range-wide and no special conservation measures are warranted in Manitoba (Shackelford et al. 2000).