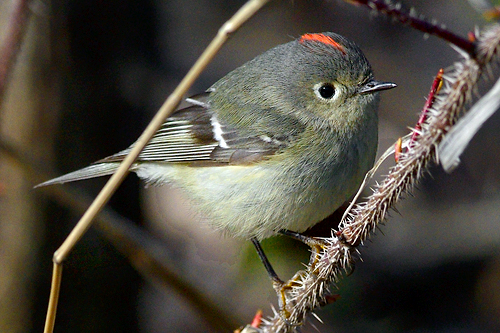 Characteristics and Range The Ruby-crowned Kinglet is slightly larger than its golden-crowned relative and is distinguished by a conspicuous pale eye-ring, while the male's red crown only flares when he is agitated. His loud, richly modulated song carries far, the species' call notes are distinctive, and foraging activity is lively and conspicuous. The breeding range includes much of Canada, excluding Arctic and southern agricultural regions, and extends south to parts of northern New England, the northern Great Lakes states, and forested mountainous regions of the western U.S.A. The winter range extends from southern British Columbia through the southern and western U.S.A. and most of Mexico (Swanson et al. 2008). During migration and in winter this species inhabits managed woodland settings such as parks, gardens, plantations, and urban forest, as well as riparian and shrubby habitats.

Distribution, Abundance, and Habitat The atlas records extend across all forested regions, northward to the Nunavut border and Hudson Bay, except for the Turtle Mountains, southern riparian woods, and much of the Spruce Woods area. Previous occurrence in the Turtle Mountains, as mentioned in The Birds of Manitoba, suggests a possible recent withdrawal from the southern range extremity, perhaps linked to a similar contraction detected in southern Ontario (Crins 2007). Definition of the southern range limit is complicated by the prolonged spring migration period (most of April and May) combined with persistent singing during migration. Some individuals that sing in small spruce plantations and shelterbelts in southern urban and agricultural regions in late May could well be territorial; indeed, nest-building was observed in Winnipeg in 2012. Peak abundance was found in a broad band across the Boreal Softwood Shield and Boreal Taiga Plains, tapering off towards the Hudson Bay coast and at the southern fringes of the boreal forest. Abundance patterns from north to south in eastern Manitoba broadly parallel those in northwestern Ontario (Crins 2007). Some local details of the abundance map may be skewed by seasonal bias, because singing tapers off markedly in mid-June, well before the end of the atlas point-counting period.

Trends, Conservation, and Recommendations The Ruby-crowned Kinglet is not a species of particular conservation concern due to its large numbers and wide distribution. Long-term BBS trends indicate decreasing numbers in most southern parts of the range, but not in Manitoba or Saskatchewan; unfortunately, coverage is sparse to non-existent in most of the core boreal breeding range. Forest fires and resource extraction activities in remote boreal regions could increasingly degrade breeding habitat.