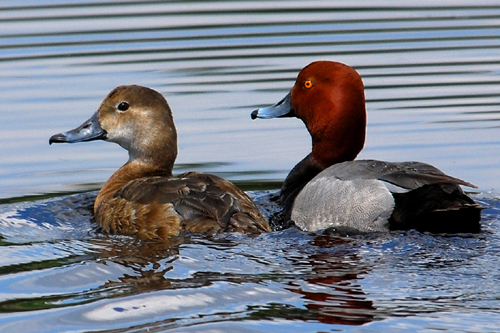 Characteristics and Range The breeding male Redhead is distinguished from the similarly coloured Canvasback by its rounder head profile, shorter bill, and darker back and flanks. The diffusely marked females and immatures resemble female and immature Ring-necked Ducks. The Redhead's core breeding range is in the Prairie Potholes, but disjunct breeding areas are scattered from Alaska to Mexico and from the Intermountain West to the Great Lakes and eastern Canada. The winter range extends from the mildest parts of southern Canada through much of the U.S.A. to Mexico, but with major concentrations on the Gulf coast, especially the Laguna Madre region of Texas and Tamaulipas (Baldassarre 2014, Woodin and Michot 2002).

Distribution, Abundance, and Habitat Atlas records were mostly concentrated in the Prairie Potholes (especially the western half) and secondarily in the Boreal Taiga Plains, especially the southern fringe and the waterfowl-rich region near The Pas. While point-count data did not yield a satisfactory abundance map, there is close correspondence between the general distribution of atlas records and computed probabilities of observation. Within the western Prairie Potholes, there were two main areas of occurrence: (a) between Minnedosa, Virden, and Russell, and (b) from Melita and Whitewater Lake to the Pembina River valley. Distribution was sparser in the Lake Manitoba plains and southern Interlake. Marginal occurrence in the Boreal Hardwood Transition may have involved lingering migrants, though there is one breeding record at Pinawa in 1989 (pers. obs.). The Redhead is a rare summer visitor to Churchill, with no documentation of breeding (Jehl 2004); two coastal atlas records involved pairs in adjacent squares near Cape Churchill in 2012.

Nests are placed in various wetland settings, usually in dense emergent vegetation, with a preference for small, semi-permanent wetlands, but sometimes in upland habitat and on islands. The Redhead is noted for frequent nest parasitism on other ducks, especially the Canvasback. Individual female nesting behaviour varies from normal or semi-parasitic to fully parasitic, the latter especially during droughts (Baldassarre 2014, Woodin and Michot 2002).

Trends, Conservation, and Recommendations Increasingly restrictive hunting regulations helped to sustain Redhead numbers during the 20th century. Total breeding population estimates from 1955 to 2002 show no clear long-term trend, but there was a sharp decline after a prominent peak in the late 1990s (Woodin and Michot 2002). While the species is clearly vulnerable to wetland loss and degradation, long-term BBS trends are increasing for Canada, the entire Prairie Potholes, and Manitoba, likely in part a reflection of the recent, prolonged wet climatic cycle. Maintenance of seagrass beds in the core winter range and the restoration and conservation of prairie wetlands are of prime importance for Redhead populations (Baldassarre 2014). Historically large losses to trotline fishing bycatch in the Laguna Madre now appear to be under control, and chemical contamination levels in Redheads are generally low, but botulism and other diseases remain problematic (Baldassarre 2014, Woodin and Michot 2002).