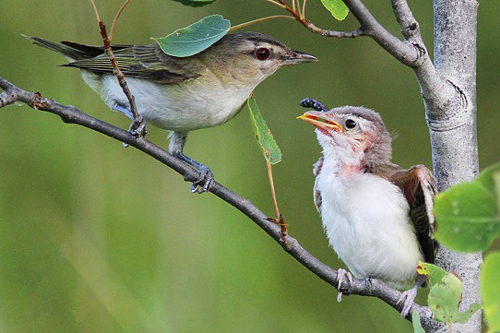 Characteristics and Range The Red-eyed Vireo is one of the most common songbirds in Manitoba and one of the most vocal, often singing tirelessly throughout the day and well into late summer. It is Canada's largest vireo and is clad in olive-green and white with a striped facial pattern that is more conspicuous in the field than the red eyes. Despite its constant vocalizing, this vireo can be difficult to see, as it often as it often sits motionless as it sings. The breeding range includes most forested and partly wooded regions of Canada, except the northernmost boreal forest and parts of the Pacific Northwest, and most of the conterminous U.S.A. (except the Southwest). North American birds winter in northern South America from Venezuela to western Brazil and northern Peru, where they overlap with South American breeding populations (Cimprich et al. 2000).

Distribution, Abundance, and Habitat Atlassers documented the Red-eyed Vireo throughout the southern two thirds of the province as indicated in The Birds of Manitoba; however, there were records in 15 squares in tall riparian forest along the Nelson, Gods, and Hayes Rivers within the Taiga Shield & Hudson Plains, almost as far north as York Factory, as well as one extraordinary record along the Seal River near Tadoule Lake. The Red-eyed Vireo was found to be extremely abundant (>13 individuals per 15 point counts) in a fairly narrow band across the southern boreal forest, i.e., the Boreal Hardwood Transition (found in 98% of surveyed squares), the southern extremity of the Boreal Softwood Shield, and across the southern Boreal Taiga Plains including the central Interlake and Porcupine Hills (found in 82% of the Boreal Taiga Plains overall). Abundance decreases gradually to the north and east of this band, falling to zero in much of the Taiga Shield & Hudson Plains. The abundance gradient to the south and west is generally steeper, reaching its lowest levels in the most intensively farmed regions. Nonetheless, even within the Prairie Potholes, the Red-eyed Vireo was found to be common (84% occupancy), with relatively high abundance in forested islands such as the Turtle Mountains and along the Arden Ridge. The probability-of-observation pattern resembles that of abundance and likewise suggests lower occupancy in grassland and predominantly agricultural areas.The Red-eyed Vireo nests in deciduous and mixed woods, using a variety of habitats from interior forests to forest edge, aspen parkland, urban parks, and even shelterbelts, but typically where the understorey is relatively thick (Cimprich et al. 2000). This plasticity may be part of the key to its abundance. The limited occurrence of mixed woods, as opposed to pure conifer stands, likely limits its northern distribution in Manitoba and explains its presence along northern rivers in riparian corridors.

Trends, Conservation, and Recommendations The Red-eyed Vireo is widespread and abundant; long-term BBS data show statistically significant increases in both Manitoba and Canada. Nonetheless, increasing trends in much of eastern North America are offset by decreases in the northwest and extreme southeast. Local populations of the Red-eyed Vireo suffer adverse effects from large clearcuts and increased cowbird parasitism rates at forest edges and in fragmented habitats (Cimprich et al. 2000).