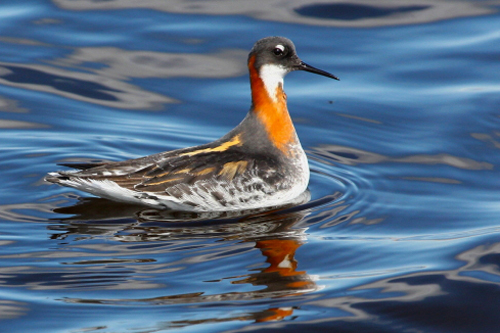 Characteristics and Range This tiny northern shorebird is the smallest of the three phalarope species. Phalaropes are known for their habit of feeding by swimming in small circles, concentrating tiny food items in a vortex, and their polyandrous breeding system, with females larger and more brightly coloured than males. The Red-necked Phalarope is Holarctic, breeding in a continuous band of the Arctic and subarctic tundra, mostly above 55įN. During the non-breeding season it is oceanic; in the Americas it winters off the Pacific Coast from Mexico to northern Chile, with the vast majority of birds utilizing the Humboldt Current between Peru and the Galapagos Islands (Rubega et al. 2000).

Distribution, Abundance, and Habitat The atlas expanded the known breeding range of the Red-necked Phalarope in Manitoba, with records 100 km inland from York Factory (57įN), up to 300 km inland along the Nunavut land border (Nueltin Lake), and added an exceptional inland record at Tadoule Lake. The Tadoule Lake record and the records from Silcox to Herchmer are all well south of the treeline. The probability of observation was generally high across the Hudson Bay Lowlands and relative abundance was highest within Wapusk National Park, where two-thirds of the squares with peak abundance occurred (6 of the 9 squares averaging >1 per point count). Relative densities were similar at inland northern tundra sites with topographic relief around Schmok, Nejanilini and Courage Lakes. Densities in the Churchill area were much lower, with no Red-necked Phalaropes recorded during 168 point counts in 10 squares, despite nest-searching effort that resulted in confirmed breeding in three squares and possible breeding in three more. This finding is important in the context of perceived declines in the Churchill area based on local, long-term field work (e.g., Jehl and Lin 2001).

In Manitoba, nesting habitat includes fens, peat bogs, and sedge meadows close to tundra ponds or streams. Although this species will nest under willow (Salix) and other shrubs, sometimes in proximity to trees, it dœs not seem prevalent where dense, tall shrubs occur (pers. obs., Rubega et al. 2000).

Trends, Conservation, and Recommendations The Red-necked Phalarope was assessed as Special Concern by COSEWIC (2014), due at least in part to the mysterious disappearance of up to three million fall staging birds in the Bay of Fundy by 1989, possibly precipitated by the intense El NiŮo-Southern Oscillations of 1982-83 and 1986-87 that had enormous impacts on plankton (Nisbet and Veit 2015). Local declines in La Pťrouse Bay have been ascribed to cold weather and predation from abundant small mammals, perhaps more detrimental to single-parent incubating species (Gratto-Trevor 1994). The extent of declines in Manitoba remains unclear; despite the absence of point count records around Churchill, this species was the fourth most abundant shorebird in the Hudson Bay Lowlands at 0.23 individuals per point count, after Wilson's Snipe (0.35), Lesser Yellowlegs (0.35), and Least Sandpiper (0.27). The Red-necked Phalarope is listed as Moderate Concern in both the U.S. Shorebird Conservation Plan (Brown et al. 2001) and the Canadian Shorebird Conservation Plan (Donaldson et al. 2000) but warrants detailed study and monitoring.