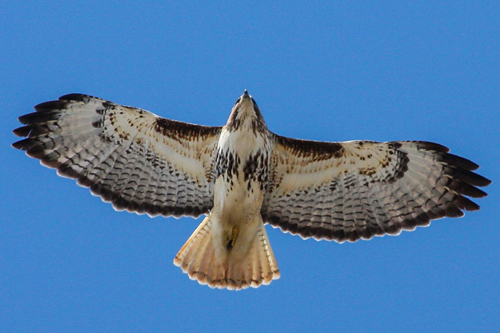 Characteristics and Range Manitoba's commonest buteo is a familiar sight along the province's roadways, as birds frequently perch on roadside utility poles or trees. Although this chunky raptor comes in a variety of plumages, from very pale to almost black, the majority have a white-speckled, brownish back; light-coloured, streaked underparts (often with a band across the belly); and a reddish tail (adults). Red-tailed Hawks breed throughout North America south of the treeline; virtually all Canadian breeders winter south of the border (Preston and Beane 2009). Manitoba breeders migrate in a southeasterly direction in fall and winter primarily in the southeastern U.S.A. (Dunn et al. 2009). During spring migration large numbers may be seen in the Pembina River and Red River valleys (Hawk Migration Association of North America 2017).

Distribution, Abundance, and Habitat Red-tailed Hawks are found virtually throughout the province. Although abundant in the Prairie Potholes, they are locally distributed in the boreal forest and scarce in the far north. They occupy a wide range of habitats, only avoiding areas with dense canopy cover and large treeless expanses (Preston and Beane 2009). Aspen parkland habitat and well-wooded areas on the prairies are preferred. The highest percentage of occupied squares was found in the Prairie Potholes, gradually diminishing northward and eastward. The western part of the Prairie Potholes also had the greatest abundance (0.06 per point count), with the species recorded on 5.7% of all point counts. The Red-tailed Hawk has become more common in the prairie region of Manitoba since the late 1800s as a result of increased tree growth on the formerly treeless grasslands (Houston and Bechard 1983). The species has also benefited from human activities, such as forest clearing and road construction, which have created appropriate habitat, both for nesting and for hunting. Formerly an accidental species in the Churchill vicinity, the Red-tailed Hawk has become more common since the completion of the transmission line to the town in 1987, as the towers provide nest sites. Major corridors in the boreal forest, such as Highway 6 and nearby transmission lines, are similarly attractive.

Trends, Conservation, and Recommendations Long-term BBS results show a slight increase between 1970 and 2012 for the province. No special recommendations are currently warranted for this widespread and resilient generalist.