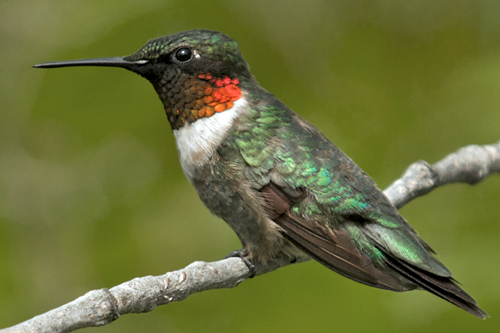 Characteristics and Range The Ruby-throated Hummingbird is the most common hummingbird species in North America and the only one known to nest in Manitoba. Weighing little more than a dime (2.5 - 3.5g) it is the smallest breeding species in eastern North America. Males and females have iridescent green upperparts with whitish undersides. The brilliant red gorget of the adult male is distinctive when viewed in sunlight but appears black in shadow. Immature birds resemble females. With the largest range of all hummingbirds, the Ruby-throated Hummingbird nests from northeastern British Columbia to Newfoundland and south to eastern Texas and Florida. The wintering range includes Central America, Mexico, and a few locations in the extreme southern U.S.A. (Weidensaul et al. 2013).

Distribution, Abundance, and Habitat Atlas results show the range of the Ruby-throated Hummingbird farther north in eastern Manitoba than described in The Birds of Manitoba, where it occurred to the Poplar River area, but otherwise similar in central (Grand Rapids) and western (The Pas) Manitoba. There were no nesting records from Thompson, Cranberry Portage (both with previous sightings), or Churchill (a few records of presumed non-breeding vagrants). As this species is difficult to observe away from feeders and flower gardens, attested by the low probability-of-observation values, its nesting range could extend farther north, in low densities, to the Thompson area. Atlas results show this hummingbird to be most closely associated with the Boreal Hardwood Transition, southernmost Boreal Taiga Plains, and the Prairie Potholes. Relative-abundance analysis suggests its highest nesting distributions to be in a band through the southern boreal forest and the boreal-parkland transition. Within the Prairie Potholes this hummingbird is most numerous in wooded areas such as the Arden Ridge and north and east of Riding Mountain. There was a dearth of records in the agriculturally dominated Red River valley and no documented nesting within the cities of Winnipeg and Brandon despite high counts during post-breeding dispersal. Breeding was confirmed in 39 squares with 24 of these pertaining to fledged young. The Ruby-throated Hummingbird nests in woodlands, forest edges, parks, orchards, and small woodlots scattered through grasslands. The presence of spiders is vital as webs are used to bind the nest and secure it to branches (Weidensaul et al. 2013).