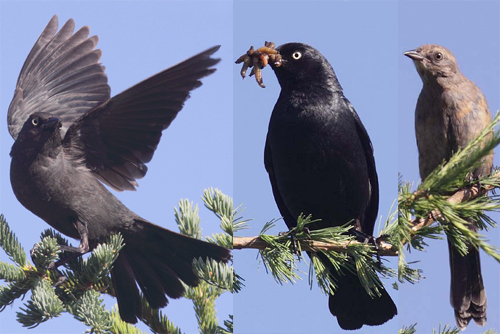 Characteristics and Range The Rusty Blackbird can be hard to distinguish from Brewer's Blackbird except for the rust-coloured edgings on its black feathers (fall and winter only) and the female's pale eye. It breeds in a broad band from Alaska across central and northern Canada to Newfoundland, extending into the northeastern U.S.A., mostly in the Appalachian Mountains. Though tied closely to wet habitats, it often joins feeding flocks with other blackbirds during migration across the northern Great Plains. The core winter range is in the southeastern U.S.A., with small numbers west to Colorado and north to southern Canada (Avery 2013).

Distribution, Abundance, and Habitat The Rusty Blackbird was found to be common in northern Manitoba, detected in 47% of squares ≥3 hours of effort or more in Arctic Plains & Mountains and 76% in the Taiga Shield & Hudson Plains. Analyses of both relative abundance and probability of observation point to high abundance in the north but an abrupt decrease in abundance and frequency of detection just south of the transition into the Boreal Softwood Shield. Abundance was highest in the Arctic Plains & Mountains; however, caution should be used here as sample sizes are low compared to other BCRs. The scarcity of records in the Boreal Softwood Shield (except the very northernmost portion) and the Boreal Taiga Plains is especially noteworthy. Range contractions along the southern edge of its breeding range have occurred, perhaps caused by climate change, but it is uncertain whether this pattern is part of an overall northward shift in the breeding range or a range contraction (Environment Canada 2015a). The residual southern portion of the range is ill-defined and characterized by localized and sporadic occurrence. Penetration by Brewer's Blackbird along highway and transmission corridors in the boreal forest is a confounding factor. Breeding habitat in Manitoba includes openings in wet forest such as fens, bogs, swamps, burns, as well as the edges of beaver ponds, estuaries, lakeshores, and streams, where it eats aquatic insects and nests in shrubs near water. This habitat type is plentiful even in some areas where Rusty Blackbirds were not detected in the central boreal forest.

Trends, Conservation, and Recommendations Rusty Blackbirds have declined alarmingly (85–95%) in numbers over the past 40 years, and historical accounts indicate the population was declining even prior to the 1970s (Greenberg and Drœge 1999). Declines are most apparent in the southern reaches of the breeding range. Although the causes of this decline are poorly understood, a combination of factors has been suggested, including loss of wetlands used by wintering individuals, contaminants on breeding grounds, incidental poisoning, and increasing disturbance of boreal wetlands where this species breeds. The species is listed internationally as Vulnerable and nationally as Special Concern. The International Rusty Blackbird Workgroup has been formed to monitor populations and to assess the factors driving the significant population decline (Environment Canada 2015, Sinclair and Powell 2016). Maintenance of wide wetland buffers that avert human impacts, land-use practices that prevent changes to surface hydrology and reduce effects to wet woodlands, and practices that avoid environmental pollution (especially mercury contamination, acidification, and pesticides) would benefit this species in the breeding range and along migration routes.