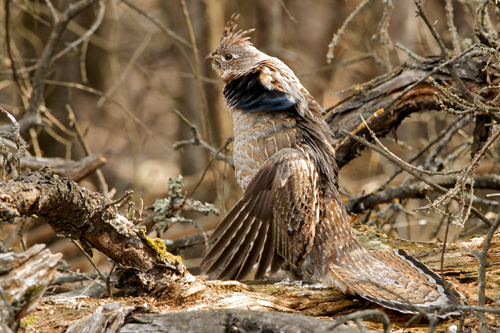 Characteristics and Range A chicken-like forest bird, the Ruffed Grouse is intricately marked with black, grey, and reddish-brown hues. Two main colour morphs exist, with "grey" birds outnumbering "red" in Manitoba and elsewhere in northern parts of the range, although this picture is somewhat complicated by various intermediate forms. The ruff, larger in the male, typically appears as a black neck patch until extended in courtship displays, which also include the famous "drumming" performance. The barred, fan-shaped tail is most obvious in the "turkey cock" display posture, though not prominent when tightly folded on a feeding or resting bird. Among the most sedentary of Manitoba birds, the Ruffed Grouse moves only short distances between preferred summer and winter habitats, determined by a combination of food supply and (perhaps secondarily) roosting cover (Rusch et al. 2000). It occurs from Alaska to Newfoundland, southward well into the U.S.A. in mountainous areas and the Great Lakes region but excluding most of the Great Plains. There are numerous isolated, peripheral populations, many of which result from introduction (including Newfoundland) or reintroduction (Rusch et al. 2000).

Distribution, Abundance, and Habitat Atlas records extend throughout the southern and central boreal forest and southward into well-wooded portions of the Prairie Potholes, but with voids where extensive cropland predominates, especially in the Red River valley. Few records extend north of the Boreal Softwood Shield into the Taiga Shield & Hudson Plains, mostly near the Nelson and Hayes rivers. Well north of the depicted range, however, a Ruffed Grouse was photographed near Churchill on June 13, 2002 (Jehl 2004). Details of the maps showing computed relative abundance and probability of observation do not correspond very closely, and are difficult to interpret. This is perhaps in part because the peak drumming period (April-May) is well before atlas point counts are done (late May to early July). Preferred Ruffed Grouse breeding habitat is aspen forest or mixed forest with a large poplar component. Large tracts of early-successional or mixed-age forest with small clearings appear to be optimal (Rusch et al. 2000). The nest is typically located at the base of a tree, stump, or boulder.

Trends, Conservation, and Recommendations Valued as both a game bird and a forest icon, the Ruffed Grouse shows stable long-term population trends, albeit subject to cyclical variation. This indicates that current management is maintaining hunting at a sustainable level. Whereas the Ruffed Grouse is adept at avoiding trees, its bursts of low-level, high-speed flight expose it to collisions with vehicles, buildings, and other human obstacles, which may limit its numbers in wooded residential areas.