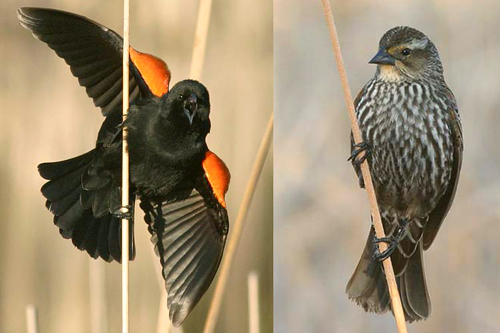 Characteristics and Range Possibly North America's most abundant bird, this species is familiar to most North Americans by sight and sound. The Red-winged Blackbird breeds throughout North America south of the Taiga Shield & Hudson Plains, with a few gaps in breeding distribution in parts of Alaska and some arid regions of Mexico. It winters across all but the northernmost conterminous U.S.A. and along Canada's Atlantic and Pacific coasts, as well as south to Baja California (Yasukawa and Searcy 1995); however, small numbers overwinter in southern Manitoba.

Distribution, Abundance, and Habitat Much as described in The Birds of Manitoba, the Red-winged Blackbird was found to be most abundant in the Prairie Potholes and generally decreasing eastward and northward through the Boreal Taiga Plains, Boreal Hardwood Transition, and Boreal Softwood Shield, with scattered records in the Taiga Shield & Hudson Plains, and no records in the Arctic Plains & Mountains. Within the Prairie Potholes, relative abundance peaked around the large prairie marsh complexes such as Whitewater Lake, in the Red River valley, and in marshes surrounding Lake Manitoba. Relative abundance was only slightly lower in the raised topography of the Manitoba Escarpment, west of Riding Mountain, and around Dauphin Lake.

The Red-winged Blackbird breeds in an exceptional variety of wetland types, both freshwater and saline, and also in sedge meadows, wooded riparian edges, roadside ditches, towns and suburban greenspaces, and in fields of hay, alfalfa, or even annual crops (Yasukawa and Searcy 1995). This adaptability doubtless contributes to its overall abundance and to its high relative abundance in Manitoba's agricultural belt.

Trends, Conservation, and Recommendations This species has doubtless benefited from forest clearing and increased food availability in cropland. Since flocks frequently feed on maturing crops (especially corn and sunflower), this species and other blackbirds are often regarded as agricultural pests and are hence exempted from protection under The Migratory Birds Convention Act. Intensive population control measures in cropland and on winter roosts have sometimes killed hundreds of thousands of Red-winged Blackbirds (Yasukawa and Searcy 1995). These measures may be partly responsible for the small but statistically significant long-term declines in Canada shown by BBS data. There is a small increase in Manitoba overall and in the province's portion of the Prairie Potholes.