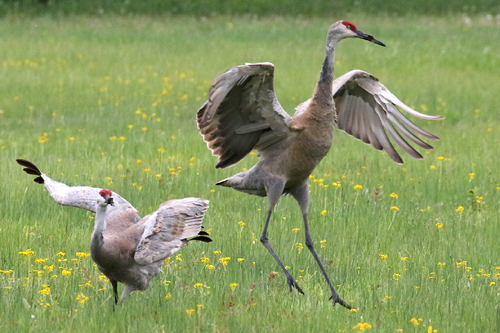 Characteristics and Range With its distinctive and far-carrying bugle call, the charismatic Sandhill Crane is often heard before it is seen. This large, long-legged species is common in much of Manitoba. Huge flocks occur in migration here. It breeds from eastern Siberia across North America, from the Arctic Circle south to the Great Lakes, with some breeding populations in midcontinental U.S.A. and resident populations in southeastern Georgia, Florida, and Cuba (Gerber et. al. 2014). Most populations are migratory with wintering areas across the southern U.S.A. and northern Mexico (Gerber et. al. 2014).

Distribution, Abundance, and Habitat As depicted in The Birds of Manitoba, this species was recorded across the province, albeit scarcely in the southwestern Prairie Potholes. The southernmost confirmed breeding in the southwest was in the Minnedosa potholes. The 12 possible breeding records south of the Trans-Canada Highway in the west may refer to non-breeding individuals, though the species bred in this area prior to the 1920s and continues to stage there (The Birds of Manitoba). The areas of greatest relative abundance were along the Hudson Bay coast, in the Boreal Hardwood Transition, and the south-central Interlake. The latter corresponds to the area that Melvin et al. (1990) calculated as having 1.3 pairs/km2, one of the lowest breeding densities from various studies in different part of North America. Relative abundance was moderately high in much of the southern and central boreal forest, with the notable exception of the western Boreal Taiga Plains between Riding Mountain and the Duck Mountains. Abundance decreased markedly towards the northwest within the Taiga Shield (western portion of the Taiga Shield & Hudson Plains). The probability of observation shows a broadly similar pattern to relative abundance but the highest values are reached near the Hudson Bay coast, presumably due to the open nature of this subarctic habitat that increases detectability and detection radius.

The Sandhill Crane is primarily a bird of open marshes, wet meadows, bogs, and fens; however, in one study in the Interlake, >90% of nests were in fens and only 5% were in bogs (Melvin et al. 1990). Sandhill Cranes readily use farmland adjacent to breeding sites, sometimes feeding on sprouting crops in spring or spilled grain in late summer and fall (The Birds of Manitoba, Gerber et al. 2014). Although sometimes described as nesting in extensive grasslands (e.g., Walkinshaw 1973), the current breeding distribution in Manitoba seems more strongly affiliated with wetlands within the boreal forest and its transition zones, perhaps because these afford less risk of disturbance during breeding, or perhaps due to a tendency to use grassy areas as non-breeding habitat (Gerber et. al. 2014). The summer presence of non-breeding yearlings in somewhat nomadic flocks, and perhaps other non-breeding individuals (Melvin et al. 1990, Taylor 1997, Gerber et al. 2014), complicates defining the southern range boundary.

Trends, Conservation, and Recommendations After suffering drastic declines throughout the continent during the early decades of the 20th century due to habitat loss, persecution, and indirect effects of human activity (Gerber et al. 2014), most populations of Sandhill Crane have recovered remarkably well. BBS data show short-term and long-term increases since the 1970s in both Manitoba and Canada. Nonetheless, habitat loss, disturbance by human presence, hunting pressure, and other lesser factors still pose threats and require ongoing monitoring (Gerber et al. 2014). Although cranes have benefited from grain farming, changes in modern agricultural practices and crops planted can have a negative impact (Gerber et al. 2014).