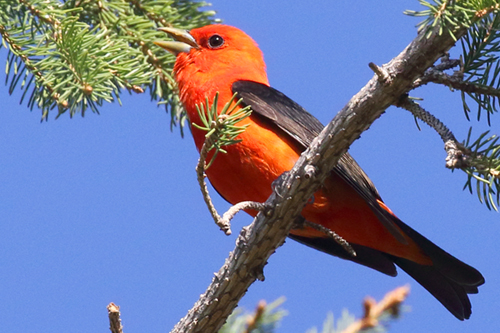 Characteristics and Range Arguably no other Manitoba bird is quite so synonymous with beauty as the Scarlet Tanager. With his overall ruby colour and contrasting jet-black wings and tail, the male is a beacon of colour in the forest canopy. Female and immature plumages are a rich yellow-green. Although the Scarlet Tanager is no longer considered a "true" tanager (genus Piranga now placed in the cardinal family, Cardinalidae), the English common name remains unchanged. It is predominantly a species of the deciduous forests and mixed-woods of eastern North America. It nests from Nova Scotia west across the Boreal Hardwood Transition and the boreal-parkland transition to southern Manitoba and easternmost Saskatchewan, and south to Oklahoma and Georgia. It winters from Panama through the Andes to Bolivia (Mowbray 1999).

Distribution, Abundance, and Habitat Atlas data show the Manitoba range of the Scarlet Tanager to be similar to that depicted in The Birds of Manitoba. In the east, it was found throughout the Boreal Hardwood Transition and slightly into the southern Boreal Softwood Shield to the Bissett area. In the west, it was found as far north as the Swan River area, but absent from the extreme southwest. There were few records in the Interlake (unlike many other species, such as Red-headed Woodpecker, Golden-winged Warbler, and Indigo Bunting, that are prevalent in the boreal-parkland transition), and few records in the Red River valley south and west of Winnipeg. The Scarlet Tanager was nowhere plentiful, but peak relative abundance was in several areas of the boreal-parkland transition, including east of Winnipeg and along the eastern slopes of the Manitoba Escarpment, especially Riding Mountain. Probability of observation was marginally higher in the former region. From Riding Mountain, there was a band of moderate abundance extending south along the Arden Ridge and decreasing southward towards the Pembina River valley. The Scarlet Tanager is rather secretive and sometimes overlooked because of the overlapping presence of common and widespread "sound-alikes", Rose-breasted Grosbeak and American Robin (The Birds of Manitoba). The Scarlet Tanager nests in a variety of forest types, most commonly in mature mixed-forests and in deciduous riparian woodlands, but also in extensive jack pine (Mowbray 1999, The Birds of Manitoba).

Trends, Conservation, and Recommendations Scarlet Tanager populations in Manitoba and Canada appear stable (BBS data), although the reliability of Manitoba estimates is low. The Scarlet Tanager is known to be sensitive to forest fragmentation and susceptible to predation and brood parasitism in small habitat patches (Mowbray 1999). Measures that reduce forest fragmentation and conserve tracts of unbroken canopy in southern Manitoba would be beneficial for this species.