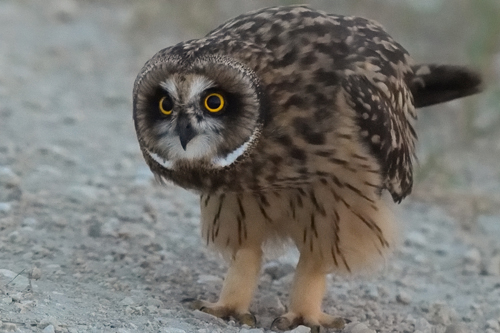 Characteristics and Range Flying buoyantly over open terrain, from marsh to tundra, the Short-eared Owl is both distinctive and relatively conspicuous thanks to its crepuscular habits.  This nomadic, cosmopolitan species breeds in North and South America, in Eurasia, and on various oceanic islands. It also winters in Africa. North American populations breed across Canada and Alaska and the northern conterminous U.S.A. and winter across much of the conterminous U.S.A. and as far south as northern Mexico. A few individuals winter in southern Manitoba on an irregular basis, presumably depending on food availability, snow cover, and temperature.

Distribution, Abundance, and Habitat Breeding evidence was found in a mere 86 squares distributed thinly throughout the province but mostly in the south central and far northern portions. Comparison with the Great Horned Owl, detected in 549 squares, gives some sense of the scarcity these results imply. Nevertheless, this species is irruptive and numbers in Manitoba fluctuate considerably (The Birds of Manitoba). The last major irruption occurred in 2005 and there was no noticeable influx during the atlas period.  The Short-eared Owl was noticeably rare in the western portion of the Prairie Potholes (found in only 13 squares and only one confirmed breeding record) and surprisingly (given the historical distribution pattern) more frequently detected in the easternmost portion of the Prairie Potholes and the southern Boreal Taiga Plains. There were few occurrences (7 occupied squares) in the Boreal Hardwood Transition but these included two confirmed breeding records. The Short-eared Owl is more easily detected in spring, and early-season atlassing close to Winnipeg could play some role in the observed pattern, though Oak Hammock Marsh is a hot spot of long standing for this species. There was a small cluster of sightings around The Pas and a few scattered detections in the northern boreal forest. The rate of detection peaked in the Hudson Bay Lowlands (2 squares), especially close to Churchill and in Wapusk National Park, where the highest probability of observation was found.

Short-eared Owls use a variety of open habitats including tundra, grasslands, and large open bogs, fens, and marshes, including where stunted trees are present. They will breed in agricultural fields, especially during irruptions; however, this seems increasingly rare in Manitoba. Possible reasons include the increasing scale and mechanization of monoculture cropland, intensive grazing of pastureland, and early-season mowing of hay crops (COSEWIC 2008). Nest sites typically have relatively dense grass (usually ungrazed) or shrub cover such as willows, and are slightly raised or dry (Wiggens et al. 2006).

Trends, Conservation, and Recommendations Listed nationally as Special Concern and provincially as Threatened, in part due to annual declines of 3% (CBC data, COSEWIC 2008), there is little doubt that this species is in decline in Manitoba despite the great difficulty in assessing trends. Habitat loss, alteration, and fragmentation through processes such as wetland drainage, urban expansion, and agricultural intensification are believed to be the main threats; additional threats include pesticides and collision with vehicles, barbed wire, and utility lines (COSEWIC 2008). While intensive livestock grazing is a habitat threat, and early-season haying may be a source of direct mortality, there is nonetheless opportunity for conservation in agricultural areas through the use of controlled stocking rates, managed grazing systems that produce heterogeneous grass height, and preservation of ephemeral wetlands.