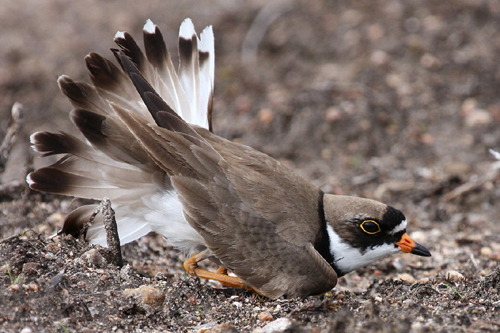 Characteristics and Range The Semipalmated Plover is the more northerly of Manitoba's two small plover species, breeding in the Hudson Bay region and migrating through the south. It is a darker shade of brown than the similar-sized Piping Plover, with a prominent black "bridle" marking in breeding plumage that is muted in fall and winter. It breeds across the Arctic and subarctic regions of North America from the Aleutian Islands to Newfoundland, and south around Hudson Bay to the James Bay region. It winters coastally from Chesapeake Bay in the east and northern California in the west through Middle America to southern South America (Nol and Blanken 2014).

Distribution, Abundance, and Habitat The distribution documented by the atlas across the Hudson Bay Lowlands differs little from that depicted in The Birds of Manitoba. Two southerly outliers, however, suggest at least occasional breeding in the Boreal Softwood Shield: one 70 km north of Leaf Rapids and another on the Nelson River 75 km southeast of Thompson. The latter record involved two birds on a wide gravel bank, one of which performed a distraction display (pers. obs.). None were recorded in 13 well-surveyed squares at Kasmere Lake, where breeding was suspected in 1947 (Mowat and Lawrie 1956). The northwestern range extent may thus be less than suggested by The Birds of Manitoba and Nol and Blanken (2014). Likewise, none were found in 2017 in >47 hours of effort in the Hasbala Lake area of adjacent Saskatchewan (S. Van Wilgenburg, pers. comm.). The Semipalmated Plover was found on all of the most northern atlas expeditions (except Kasmere Lake) but at very low rates: detected in only 77 squares and on just 71 point counts (too few to map relative abundance). This is likely because of habitat preference for well-drained and fairly open gravel or sandy sites, although "heath-lichen" is also used (Nol and Blanken 2014). Nesting in the "four corners" region (where Manitoba, Saskatchewan, Nunavut, and the Northwest Territories meet), which is more forested than the Hudson Bay Lowlands, may therefore be limited to eskers and other sandy post-glacial features.

Trends, Conservation, and Recommendations Migration counts suggest either small declines or relatively stable populations and so the Semipalmated Plover is considered of Low Concern in the Canadian Shorebird Plan (Donaldson et al. 2000). Nonetheless, this species faces a wide range of threats throughout its lifecycle and improved population monitoring and research on the impact of climate change are recommended.