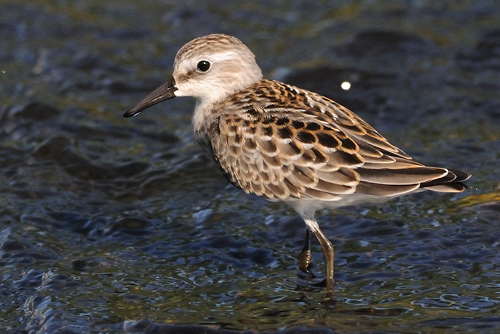 Characteristics and Range The Semipalmated Sandpiper is extremely similar to the Least Sandpiper in size and shape but generally with a colder grey-brown plumage (less rufous), dark legs, and slightly stouter bill. It nests across the Arctic Plains & Mountains from Labrador to Alaska and south along the shore of Hudson Bay to the northern James Bay region. It winters in coastal Middle America and northern South America.

Distribution, Abundance, and Habitat Once described as the most abundant breeding shorebird in the Churchill area prior to the 1930s, the Semipalmated Sandpiper has now all but disappeared as a breeding bird in Manitoba (Jehl and Lin 2001). Documenting its current breeding range has proven exceptionally difficult. Birds seen in the first three weeks of June in northern Manitoba were coded differently by observers, producing breeding evidence in 24 squares, but there were many additional records of small flocks, typically foraging around pools or in the intertidal zone, that were considered migrants. Although a distraction display was reported in one square, no nests or downy young were found despite extensive surveys across the north, the relative ease of locating Semipalmated Sandpiper nests (C. Gratto-Trevor, pers. comm.), and the species' loosely colonial nesting tendency. There were a few detections of probable migrants in the Churchill region, where extensive shorebird research has not located any nests since 2001 (Jehl 2007). The only inland records were at Nejanilini Lake and the western portions of Wapusk National Park, where the last known nest may have been in 1999 (Rockwell et al. 2009).

The claim by Sammler et al. (2008) that the density of Semipalmated Sandpipers in the Cape Churchill area increased from 1984 to 2000 must be interpreted with extreme caution since their surveys took place on one day in the second half of June (a period when non-breeding birds can still be present) in 1984, 1999 and 2000 and no nests were reported. Although the Semipalmated Sandpiper may hang on in a few remote sites (perhaps with semi-colonial nesting), there must now be some doubt as to whether it still nests in Manitoba. The coastal sedge-meadow habitat that it prefers for nesting (The Birds of Manitoba) is still found in northern Manitoba. Nonetheless, goose grazing (Klima and Jehl 2012) and the drying of sedge meadows due to isostatic rebound and/or climate change (Ballantyne and Nol 2015) may have proven costly for this species, although factors elsewhere in the range are also likely important (Gratto-Trevor et al. 2011).

Trends, Conservation, and Recommendations Migration counts suggest population decline (Gratto-Trevor et al. 2012) and the Semipalmated Sandpiper is now considered globally Near-threatened. The nature of the perceived decline is poorly understood. Large numbers are hunted annually in Suriname and elsewhere and a complex cocktail of habitat alteration in nesting, migration, and wintering habitats, appears to be affecting nutrition, survivorship, and fecundity (Andres et al. 2012). This species merits a more extensive, renewed search effort in the Hudson Bay Lowlands and better migration monitoring in the Great Plains.