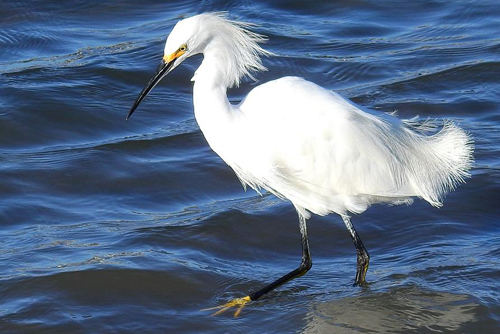 Characteristics and Range About half as tall as a Great Blue Heron, the Snowy Egret is distinguished from other small white egrets (in Manitoba) by its yellow feet contrasting with black legs and yellow lores, together with a black bill (non-breeding and immature plumages have paler bill and legs). This egret's delicate back nuptial plumes called "aigrettes", once used to adorn ladies' hats, were so valued that it was hunted almost to extirpation in North America (now greatly recovered). The Snowy Egret is widespread in South and Middle America, mostly in resident populations. North American populations are mostly migratory (with some exceptions such as in Florida), nesting throughout the southern half of the U.S.A., with outlying nesting pockets in Oregon, Montana, North Dakota, Minnesota, and Wisconsin, and wintering from the southern U.S.A. to Panama (Parsons and Master 2000). Until 2010, the Snowy Egret had been confirmed nesting only once in Canada (1986 in Ontario, Curry and Bryant 1987), although breeding has been suspected in Nova Scotia (Erskine 1992). In 2011, it became the atlas's third newly confirmed breeding species in Manitoba.

Distribution, Abundance, and Habitat Although first observed in Manitoba in 1930, it was not until 1969 and 1974 that the second and third provincial observations were noted (The Birds of Manitoba). Thereafter, Snowy Egrets were seen here more regularly, with an occasional hiatus of several years between sightings. Until 2000, the majority of observations occurred at Oak Hammock Marsh, but recent observations have been primarily in western Manitoba, especially at Whitewater Lake. During the atlas period, Snowy Egrets were recorded in five squares; three at Whitewater Lake, and one each at Oak Lake, and the Shoal Lakes. It seemed inevitable that Snowy Egrets would eventually be found nesting in Manitoba, but it was not until 15 August, 2011 when a large mixed-species colony was investigated on the west end of Whitewater Lake that Manitoba's first nesting was documented. A Snowy Egret was observed from a canœ as it fed five nearly fledged young no more than 50 m from a colony of ˃200 nests of Double-crested Cormorant, Black-crowned Night Heron, Great Egret, and Cattle Egret (pers. obs.). The food-rich terminal basin of Whitewater Lake and its surrounding ephemeral potholes, including periodically flooded trees on some banks and islands, is excellent habitat for this egret (and other long-legged waders) and is similar to habitats found in the core interior portion of the range in the U.S.A.

Trends, Conservation, and Recommendations The Snowy Egret was once nearly wiped off the continent by the feather trade, but outraged citizens, led by women who chose not to wear feathers eventually forced the passage of laws that reduced the slaughter (Souder 2013). The Snowy Egret then staged a remarkable recovery during the middle of the 20th century, but has been subject to flux since then, with losses in some areas (especially the Atlantic coast) and gains in others (Parsons and Master 2000). Despite its expansion into areas such as Manitoba, the Snowy Egret still faces a variety of threats and remains vulnerable to population losses, especially due to its specialized foraging requirements and susceptibility to wetlands drainage.