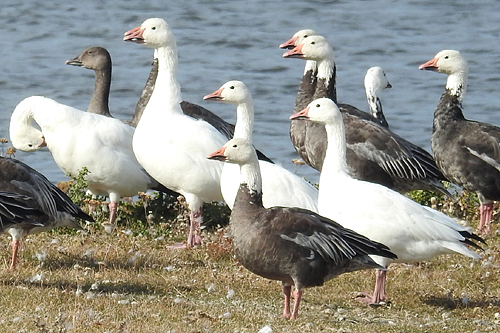 Characteristics and Range The Snow Goose belongs to a group often called "white geese", which includes its smaller relative, Ross's Goose. There are two colour morphs, white (formerly called "snow goose" in the narrow sense) and dark (formerly and sometimes still referred to as "blue goose"). The Snow Goose is a medium-sized goose, with a pink bill that has a so-called "grinning patch". White morph Snow Geese have black wingtips and adult dark morph birds are largely dark bluish-grey, with a white head, a white undertail, and two-toned wings. Intermediates between the morphs are common and occasionally the species interbreeds with Ross's Goose. The breeding range stretches from Wrangel Island, Russia and northern Alaska in the west to Baffin Island and northern Greenland in the east, and to Hudson Bay and James Bay in the south (Mowbray et al. 2000). The Snow Goose is widespread in migration and winters from coastal southern British Columbia to northwestern Mexico, from the Gulf of Mexico north to Iowa, and on the Atlantic coast between New Jersey and North Carolina, with ever-increasing numbers elsewhere (Mowbray et al. 2000). Central Arctic and subarctic breeders, including those from Manitoba, winter from Iowa and Nebraska south to the Gulf coast of Louisiana and Texas and to Mexico (Mowbray et al. 2000).

Distribution, Abundance, and Habitat Snow Geese were found in seven squares (45%) of the Arctic Plains & Mountains and 26 squares (5%) of the Taiga Shield & Hudson Plains. All squares were within the immediate vicinity of the Hudson Bay coast. Breeding in the region is believed to have started in 1954, when a few pairs were found, but the population increased so rapidly that by 1997 the La Pérouse Bay colony near Cape Churchill contained 44,500 pairs (Jehl 2004). The resulting destruction of feeding habitat from overgrazing has led to expanding colony boundaries, so that now the whole region in the vicinity of the bay is a vast mudflat with virtually no vegetation (pers. obs.). As of 2004, the midcontinent population continued to grow at an annual rate of 5-7% (Jehl 2004), although it may now be levelling off. Breeding habitat consists of tundra marshes north of the treeline, where Snow Geese grub for roots and leafy vegetation, while migrating and wintering birds now feed mostly in grain fields (Mowbray et al. 2000).

Trends, Conservation, and Recommendations The substantial increase in Snow Goose numbers has been attributed to agricultural expansion along the migration route and in the wintering grounds, decreases in harvest rates, the establishment of refuges, and climate change (Jefferies et al. 2003, Abraham et al. 2005). This abundance has caused degradation of the vegetation on the breeding grounds, with nourishment consequences for breeding birds (Abraham et al. 2005). Even with the exceptional introduction of a spring hunting season as a control measure in several jurisdictions including Manitoba, it remains to be seen if Snow Goose numbers will stabilize, and what the long-term impacts to Arctic habitat will be.