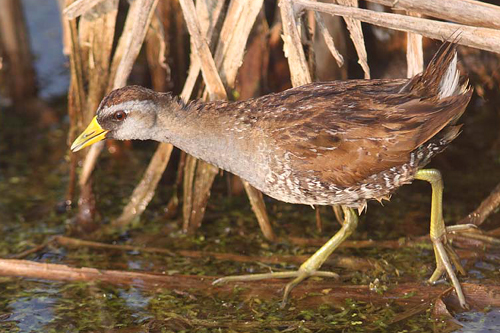 Characteristics and Range If you step out of your vehicle next to a marsh on a mild, late-spring evening and inadvertently slam the car door, you will no doubt be greeted by a loud chorus of descending calls, produced by Soras, emanating from the cattails. The Sora is by far the most common of the regularly-occurring rail species in Manitoba. It is starling-sized and shaped somewhat like a miniature chicken, with brown and black upperpart feathers edged in white, a black face above a grey breast, and black-and-white barring on the flanks. The beak is short and yellow and the legs are olive-green. Although most vocal at night, the Sora may call at any time of day. It nests across North America, as far north as the treeline from Yukon to the Maritimes and south to New England, the U.S. Midwest, and throughout most of the western states. It winters from the southern U.S.A. through the Caribbean to northern South America (Melvin and Gibbs 2012).

Distribution, Abundance, and Habitat Atlas data show the Sora's range to be essentially province-wide, excepting the Arctic Plains & Mountains, much as depicted in The Birds of Manitoba, although reaching the Nunavut land border at least in the extreme northwest near Kasmere Lake. The Sora was most commonly recorded in western Manitoba, south of the Duck Mountains and west of the Manitoba Escarpment, and around Lake Manitoba. A smaller concentration was found near The Pas. In the Prairie Potholes 80% of squares were occupied, with occupancy diminishing both to the north and the east. Abundance was particularly high in the extreme southwest of the province, due to a combination of abundant suitable habitat and intense survey effort. Abundance was very low in the Boreal Softwood Shield and northward; however, access is difficult in much of the northern two-thirds of the province and visits tended to be brief, likely resulting in under-reporting of the species. The Sora can be found in marshes of any size; indeed, even in road-side ditches, as long as there is adequate cover. Although numbers are difficult to estimate, large marshes, such as Whitewater Lake, Delta Marsh, or Oak Hammock Marsh, may harbour dozens or even hundreds of pairs. In northern Manitoba sedge marshes provide the only suitable habitat, while in the south areas with cattails and to a lesser extent Phragmites are favoured.

Trends, Conservation, and Recommendations BBS data show relative stability in Manitoba and Canada. As with all wetland species, habitat loss through wetland drainage poses a threat, although in the wet years since the late 1990s, with many ephemeral wetlands holding water, the Sora has been widespread and abundant in southern Manitoba.