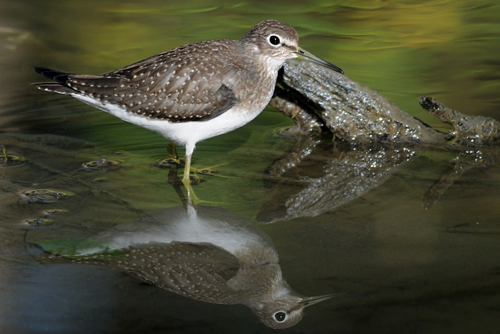 Characteristics and Range Intermediate in size and general appearance between a Spotted Sandpiper and a Lesser Yellowlegs, the Solitary Sandpiper is distinguished by a prominent white eye-ring, pale-dotted back, and dark-barred white outer tail-feathers (clearly visible in flight). The clear, high-pitched flight calls and display songs aid detection of this sparsely distributed species, which breeds across most of the boreal forest from Alaska and Yukon to Labrador and New Brunswick. It winters from south Texas, Mexico, and the Caribbean to south-central Argentina (Moskoff 2011).

Distribution, Abundance, and Habitat Atlas records are scattered throughout the boreal forest north to the Nunavut land border, but extend south of the previously estimated range limit (The Birds of Manitoba, Moskoff 2011), especially in the Boreal Hardwood Transition and marginally in the western Prairie Potholes. The sparse point-count records did not yield useful abundance maps, while computed probabilities of observation are elevated in the far northwest and northeast. This is difficult to interpret and seems at odds with the rather uniform distribution of atlas records through all boreal regions, albeit in low numbers. Detection rates were equally high (15% of surveyed squares) in the Boreal Softwood Shield and the Taiga Shield & Hudson Plains, and markedly lower in the Boreal Taiga Plains and Boreal Hardwood Transition. Breeding habitat includes shallow lakes, ponds, and wetland edges, especially in coniferous forest and muskeg settings; highway ditches and borrow pits may be used as well as natural wet areas, both permanent and seasonal. The Solitary Sandpiper has the remarkable habit for a shorebird of re-using abandoned nests of American Robins and other medium-sized arboreal passerines, a habit it shares with a similar Eurasian species, the Green Sandpiper (T. ochropus) and occasionally the Wood Sandpiper (T. glareola) (Moskoff 2011). This behaviour presumably allows these species to occupy flooded areas, such as beaver swamps, where few ground-nesting opportunities exist.

Trends, Conservation, and Recommendations Because it is much less gregarious than many sandpipers, and is not reliant on highly concentrated food sources at migratory stopovers, the Solitary Sandpiper is less sensitive than some shorebirds to hunting pressure and habitat degradation in wintering areas. Furthermore, habitat disturbance in the breeding range is generally low (except at the southern edge), though increasing. This also means, however, that the Solitary Sandpiper is poorly monitored, and numbers detected on BBS routes are too low to yield reliable population trends. Thus, while the species appears to be secure, improved monitoring is desirable. Given the species' large range and low breeding density, this is perhaps best achieved by the planned repetition of breeding bird atlases at 20-year intervals.