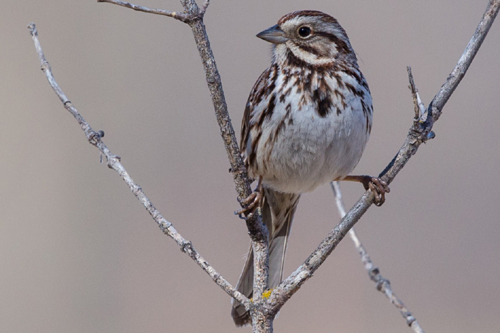 Characteristics and Range A familiar sparrow with a bright and cheerful song, this species is one of the first migrants to greet Manitobans each spring. One of the most widespread songbirds in North America, it can be found breeding from Newfoundland to the Aleutians, and as far south as Northern Mexico. It winters from southern Alaska, South Dakota, and southern Quťbec south to northern Mexico and Florida. Song Sparrows show an exceptional amount of geographic variation, with 52 subspecies proposed and about 24 currently recognized (Arcese et al. 2002).

Distribution, Abundance, and Habitat Atlassers documented a similar distribution to that shown in The Birds of Manitoba, with the species breeding throughout most of the province. A key difference is the species was detected across the far north, to the Nunavut land border, except in the Arctic Plains & Mountains. The species was most abundant in the Boreal Taiga Plains, followed by the Prairie Potholes and Boreal Hardwood Transition. In the Boreal Taiga Plains, its high abundance follows the boreal-parkland transition and decreases northward. Likewise, relative abundance generally decreased northward in Manitoba, with locally higher numbers in human settlements and along rivers, lakes, and roads.

Song Sparrows typically breed in brushy areas that border rivers, wetlands, and lakes, or along forest edges and openings, as well as in overgrown fields, farmsteads, and shrubby gardens. In the north, river corridors are a favoured breeding habitat; however, as remote fieldwork was concentrated along navigable rivers for practical reasons, some caution is required when comparing abundances in northern and southern Manitoba. The probability of observation shows a slightly different pattern from the relative abundance, with the highest likelihood of detection in the Prairie Potholes and generally decreasing northward and eastward into the boreal forest. This may suggest that the Song Sparrow is more widespread but at lower densities in southwestern Manitoba; however, other factors likely influenced this result.† Another possible explanation for the observed pattern is that greater early-season survey effort in southern Manitoba increased the rates of detection, as Song Sparrows establish territories before most other passerines.

Trends, Conservation, and Recommendations Certain populations of the Song Sparrow have been found to be declining, while others are increasing (Arcese et. al 2002). BBS data show a slight decline in Canada overall but no significant trend in Manitoba. Generally tolerant of urbanization, the species may increase in areas of new disturbance such as roadways or logging activity in boreal regions. In agricultural areas, the elimination of old farmsteads, idle field corners, shelterbelts, small sloughs, and other minor landscape irregularities can have a negative impact on the species (Arcese et. al 2002).