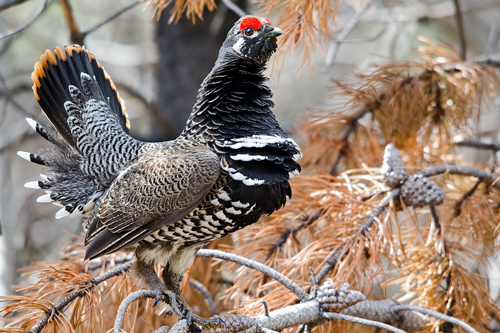 Characteristics and Range The Spruce Grouse is large and plump with dark blue-grey (male) or cryptic brown or rufous (female) colouration, and mottled white underparts. The male erects the red wattles known as "combs" over his eyes, puffs out his black throat feathers, and fans his rufous-tipped, black tail in display. Typically elusive yet sometimes seemingly unwary, this handsome grouse is known by the nickname of "fool hen". The Spruce Grouse is resident in North America's boreal forest from Alaska to Newfoundland and from the treeline south to include the Boreal Hardwood Transition and Atlantic Northern Forest, as well as the Rocky Mountains as far south as central Idaho (Boag and Schrœder 1992), the latter population sometimes being raised to full species status as "Franklin's Grouse". It feeds primarily on spruce and pine needles and its distribution is linked to extensive conifer-dominated stands.

Distribution, Abundance, and Habitat The Spruce Grouse was found breeding throughout the province except for the Prairie Potholes, the southernmost portion of the Boreal Taiga Plains, and the Arctic Plains & Mountains. In the far north along the Nunavut land border, it was not found east of Nueltin Lake, which suggests the northern distribution is slightly less extensive than depicted in The Birds of Manitoba and Boag and Schrœder (1992). Nonetheless, this species is very difficult to detect and was undoubtedly missed in many squares, especially those with low coverage. For that reason, detection rates were nowhere high, the highest being in the Boreal Softwood Shield (found in 20% of squares with ≥3 hours of effort) and the Boreal Hardwood Transition (15%), with slightly lower percentages in the Taiga Shield & Hudson Plains (12%) and the Boreal Taiga Plains (8%). Detection rates are too low to provide meaningful abundance comparisons across BCRs but suggest elevated abundance in northwest Manitoba.

Trends, Conservation, and Recommendations BBS data suggest a long-term increase in Manitoba and Canada, though detection rates and thus reliability are low. Detection rates on the CBC are also too low to decipher a trend. Numerous methods have been used to monitor southerly populations of Spruce Grouse, but overall population numbers and trends are poorly understood due to the remoteness of so much of the species' range. Forest clearing along the southern range edge has caused localised population losses, and fire suppression also negatively impacts Spruce Grouse (Boag and Schrœder 1992). There are opportunities for modern forestry management in conifer stands to mimic fire processes and regeneration to the benefit of this grouse.