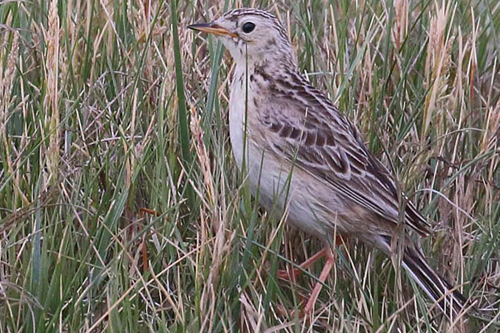 Characteristics and Range Sprague's Pipit is a prairie songbird that one would seldom find without knowing its song—a swirling, descending cascade of high whistles given while circling high in the air. Its plumage is a cryptic brownish tan, with white outer tail feathers most often seen in flight. Like other Great Plains endemics, Sprague's Pipit has a very limited nesting distribution in the Canadian Prairie Provinces and extreme northern Great Plains states. It winters in extreme southern U.S.A. and northern Mexico.

Distribution, Abundance, and Habitat Uncommon and rather localized, Sprague's Pipits nest in open, expansive (usually >150 hectares in size) short- and mixed-grass prairie, haylands, and pastures (Davis et al. 2014). Although it typically adapts poorly to conversion of native grasslands, in southwestern Manitoba, where few native prairie tracts remain, the species is regularly found in dense, tufted pockets of tame pasturelands and in sparse hayland (De Smet 1992). During the atlas period, it was largely restricted to the western half of the Prairie Potholes and southwest corner of the Boreal Taiga Plains. Of 112 atlas squares where it was recorded, 81% were in the southwest (Region 1), and 15% were in grasslands south and west of Riding Mountain. The remaining four squares were in south-central Manitoba, including three rather unusual sightings within 50 km southwest to northwest of Winnipeg. The mean abundance of Sprague's Pipit was ~0.2 per point count in squares where the species was found, with only seven squares averaging >0.4, comprising four squares in the Ellice-Archie community pasture near St-Lazare, two in the "Poverty Plains" grasslands west of Melita, and one in a large grassland complex north of Griswold.

Trends, Conservation, and Recommendations This species was described as one of the most common prairie birds in Manitoba from the Pembina Hills west during the late 1800s, but it was already disappearing in areas where prairies were being broken up (Thompson [Seton] 1890). A century later, it had been reduced to a localized breeder in the southwest, and was sporadic or had disappeared entirely from grasslands throughout most of southeastern and south-central Manitoba (The Birds of Manitoba), although small numbers still occurred annually well east of Winnipeg until 1989. Highly significant BBS declines in Canada and range-wide since the 1960s have led to the species being listed as Threatened federally and provincially. It has been estimated that at least 75% of Canada's native grasslands have been lost to cultivation, and the largest declines probably occurred during settlement of the prairies in the late 19th and early 20th centuries (Davis et al. 2014). Conservation and enhancement of expansive native and other suitable grassland parcels is critical for conserving Sprague's Pipit populations. As most of the remaining nesting locales in Manitoba are in private pasturelands, active stewardship and promotion of appropriate grazing management regimes will be needed to assist the species in its recovery. These grazing regimes should strive towards stimulating growth of native plants, and reducing invasion by exotic plants and woody vegetation (Davis et al. 2014).