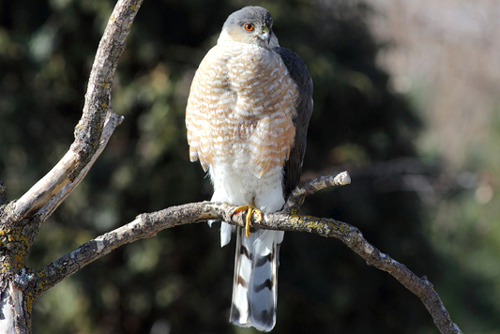 Characteristics and Range Manitoba's smallest accipiter is about the size of a domestic pigeon, with short wings and a long tail. The adult plumage is grey above, with finely-barred rusty underparts. Like its relatives, the Northern Goshawk and Cooper's Hawk, it breeds in woodlands, where it is primarily a hunter of small birds. Unlike the similar-looking Cooper's Hawk, however, it is mostly a boreal breeder in Manitoba. Its breeding range stretches from Alaska to Newfoundland, nearly to the treeline, and south through mountainous regions to South America (where some resident populations may warrant full species status), with isolated populations in the West Indies (Bildstein and Meyer 2000). Most Manitoban breeders migrate for the winter and have been primarily encountered in the central U.S.A., south to northern Texas (Dunn et al. 2009).

Distribution, Abundance, and Habitat Most atlas observations were made in the Boreal Hardwood Transition and in the western part of the Boreal Taiga Plains (in the vicinity of The Pas). There were detections in almost 25% of squares in the Boreal Hardwood Transition, although overall numbers of occupied squares were higher in the Boreal Taiga Plains and Boreal Softwood Shield. Although breeding has occurred in forested areas in the south, such as in conifer plantations in the Turtle Mountains (The Birds of Manitoba), confusion of identification with Cooper's Hawk was likely responsible for some of the reports in the Prairie Potholes. Although Sharp-shinned Hawks are seen in considerable numbers during both spring and fall migration in southern Manitoba, the species is secretive on the breeding grounds, hence abundance is difficult to quantify. Although the species nests in most forest types in its range, it prefers dense stands with a conifer component (Bildstein and Meyer 2000). As a result of both its secretive behaviour and preference for dense woods for nesting, relatively little is known about its breeding biology.

Trends, Conservation, and Recommendations Sharp-shinned Hawks, like most other raptor species, were formerly heavily persecuted, but shooting is no longer believed to be a serious threat (Bildstein and Meyer 2000). Similarly, the banning of DDT and other persistent pesticides has benefited the species, but it may still be vulnerable to pesticide use in Latin America. BBS trends are positive in Manitoba and Canada but not statistically significant and reliability is generally low. Collisions with vehicles, windows, and other obstacles are significant sources of mortality, the latter due at least in part to the proliferation of bird feeders in gardens, which attract concentrations of prey. Bird feeding is also believed responsible for the increasing numbers of Sharp-shinned Hawks wintering north of the traditional winter range. In Manitoba, logging and mining may pose the greatest threats, and this species warrants consideration in the design of forestry best management practices.